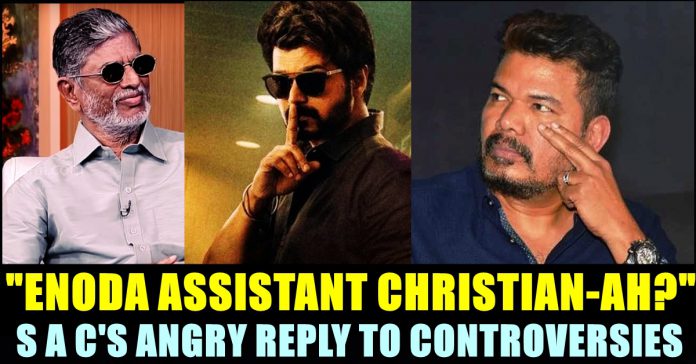 Actor Vijay’s father and director S.A Chandrasekar appeared in an interaction with Puthiya Thalaimurai to clear the air regarding the recent controversies targeted on his son. In the interaction, S.A.C answered to many questions, including the one about the IT raid in the house of the actor.

Recently Vijay Sethupathi got dejected to come across a baseless rumours saying that actor Vijay, himself and other celebrities are involved in religious conversion, slammed it, in a way of proving them as fake reports. The rumours were floating on social media apps such as whatsapp and Vijay Sethupathi kept a full stop with his single tweet through his official twitter account. Now S.A Chandrasekar also required to answer to the same question by the reporter.

The veteran filmmaker has said that he and son never encouraged religious conversion at all. “I was born in a Christian family. In my name, S and A stands for Senathipathi Pillai, Alex respectively. Bible says that a true christian would love every other religion as his own. That is the reason behind why I married Shoba after loving her for 5 years. She is a Hindu and our marriage took place in Dharma Prakash. Till today my wife devotes Hindu gods and maintains a Pooja room in our house” said the filmmaker.

The rumour alleged that Jeppiar’s daughter Regina is spearheading a Christian conversion movement in Tamilnadu. It said that the conversion did happen with the inclusion of actors like Vijay Sethupathi, Arya, Ramesh Kanna, Aarthi and few other top celebrities. The statement further said that the funding for movie Bigil was done by Regina and AGS got a cut by portraying themselves as producers. It also statet that the entire sale proceeds went to Vijay, producer and Anbu Chezhiyan and added that they transferred the funds to Regina.

Watch the interview of him here :

Comment your views on these answers provided by the filmmaker !!

Previous article“Cooku With Comali” Pugazh Rejected “MASTER” For This Reason !!
Next articleSamantha’s Warning To Fan Who Misbehaved !! WATCH

Female cinema celebrities has been conducting question and answer session in their official social media handles to interact with her followers to kill time...