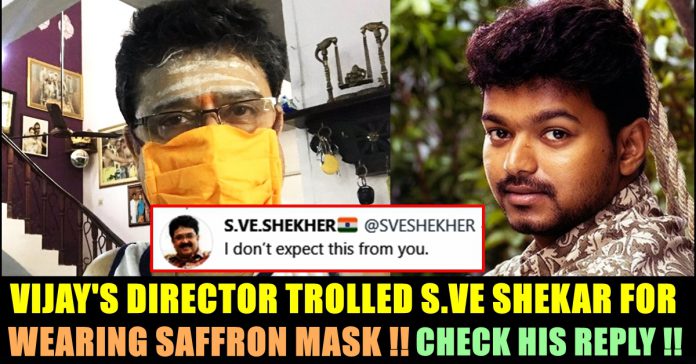 For posting a picture with safety mask to create awareness, actor S.Ve Shekar who belongs to BJP political party got trolled by John Mahendran, son of veteran filmmaker Mahendran and director of actor Vijay’s romcom “Sachien”. When S.Ve Shekar said that he didn’t expect such comment from him, John said that he too didn’t expect such statement from him about working women lately.

Being a Tamil playwright and film actor, S.Ve Shekar has been expressing his views and opinions regarding tamilnadu politics through his micro blogging social media site on behalf of BJP political party. In his recent tweet, S.Ve Shekar uploaded a picture of himself wearing saffron color mask. “Wear A Mask” he said in his tweet.

John Mahendran who is a filmmaker by profession, wrote “Gift from Dubai” in his tweet, in a way of mocking the former actor.

Shekar who saw his reply, came up with a reply saying that he didn’t expect such comment from him. “I don’t expect this from you.” he wrote in his reply tweet, to which John expressed his disappointment over S.Ve Shekar’s facebook post which landed him in big trouble. “Even We never expected cheap comment about working n achieving women from you too SIR..” John replied to him.

Even We never expected cheap comment about working n achieving women from you too SIR..

To a fan, Joh further said that he was a great fan of S.Ve Shekar till he made that vulgar comment about working women. “I was his great fan but lost impression the moment he spoke so vulgar abt working women.”

I was his great fan but lost impression the moment he spoke so vulgar abt working women.

S.Ve Shekar is known for his controversial statements in his social media accounts. He was searched by police in 2018 for one of his Facebook post regarding Tamilnadu Governor Banwarilal Purohit’s act of patting on a female journalist’s cheek. S.Ve Shekar shared a Facebook post of one of his Facebook friend. The Facebook post shared by Shekher was titled “Madurai University, Governor and the Cheeks of a Virgin girl”. It claimed that more sexual abuses happen in media houses than in universities. It also claimed that a woman cannot become a reporter or news reader without sleeping with bigwigs. This made a huge controversy and court ordered to arrest S.Ve Shekar. However, the arrest didn’t take place.

This post from S.Ve Shekar in the year 2018 made him to lose a great fan like John Mahendran. S.Ve Shekar made an entry into politics by contesting and winning the Legislative Assembly Elections as an AIADMK candidate from Mylapore in 2006. He was expelled from AIADMK on 30 July 2009. He later joined the Indian National Congress. Now he is in BJP. Comment your views on the series of tweets posted by the filmmaker !!

A video has surfaced on social media that shows a brave and vigilant Railway Protection Force (RPF) personnel saving a passenger from being crushed...

Crowd Chanted “DK,DK” While Vijay Was Fielding At The Boundary !! Here’s How The Cricketer Responded

A viral video showing famous Indian cricketer Murali Vijay reacting to the crowd who chanted "DK, DK" while he was fielding at the boundary...