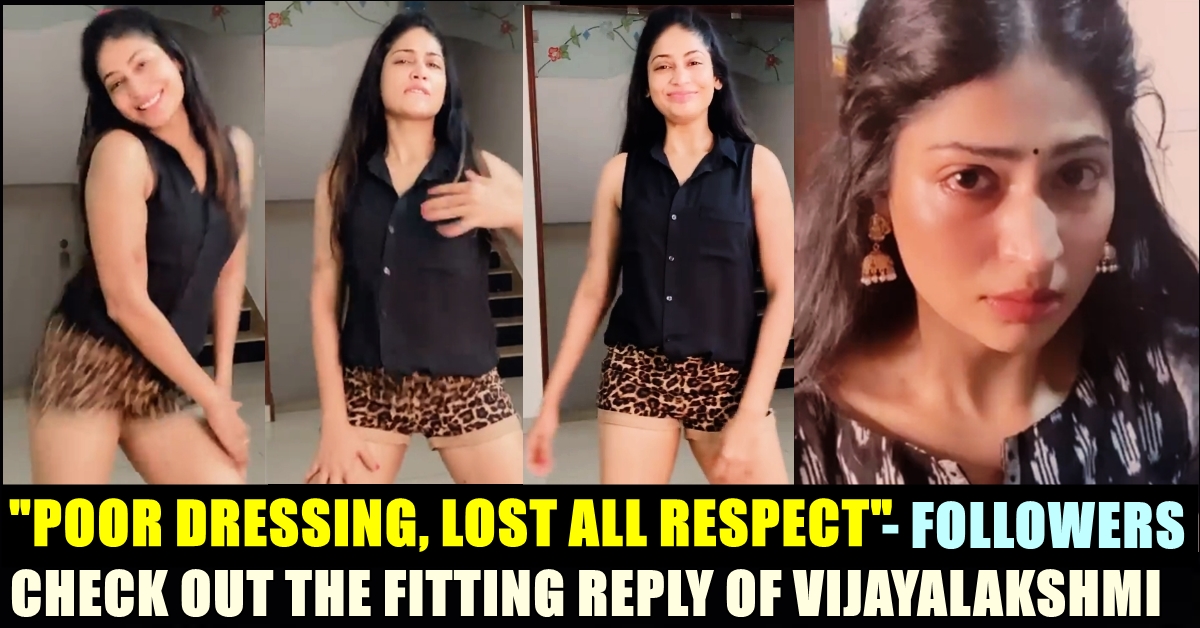 Actress Vijayalakshmi who is known among Tamil film audience for appearing in films such as “Chennai 28”, “Anjaathe” is pretty much active in social media platforms. For a recent dance video she uploaded in her official Instagram account, many people started advising her on what to wear and what not to. In a way of shutting all of them for once and for all, the actress came up with a subtle reply and won the hearts of many of her folowers.

She who is running a youtube channel, is busy uploading posts in her official social media platforms as well. Most recently, Vijayalakshmi came up with an Instagram video of herself dancing for the song “Vroom Vroom”. She added the post with a caption saying “The confidence u get when u work out regularly ♥️ #fitmomsrock #vroomvroom #whyshouldmom”

As soon as seeing the video, many of the actress’s 4 lakh plus followers started schooling her on “how to be a mom” and “how to dress”. A follower said that he lost all his respect for the actress and another one said that she could have worn a longer “shorts”

Replying to these kind of comments, the actress herself came up with a reply saying “thanks” to those who advised her. She who made sure that she got her life sorted, gave a virtual hug to the people who supported her.

“Pothu nalam karuthi enakku advice sai alli kudutha ellarukum en nandrigal. But I got my life sorted. So thanks but no thanks 🙏. Apart from that, ennoda beautiful ppl ku big hug” read the reply of the “Anjathe” actress.

Check out the screen shot her her reply below :

Many women, especially mothers came in to support the actress. A mother asked people to grow up and questioned why a woman should sacrifice after becoming a mother. Vijayalakshmi replied to them with love and hug emojis. Another mother said that Vijayalakshmi is motivating her fellow mothers through her post and suggested the actress to be strong and not to worry.

“Those Who Are Trusting Him Would Be Abandoned Midway” – CM Edappadi K Pazhaniswamy About TTV Dhinakaran
SJ Surya Shared An Old Video Of Sivakarthikeyan Imitating Him !! MUST WATCH