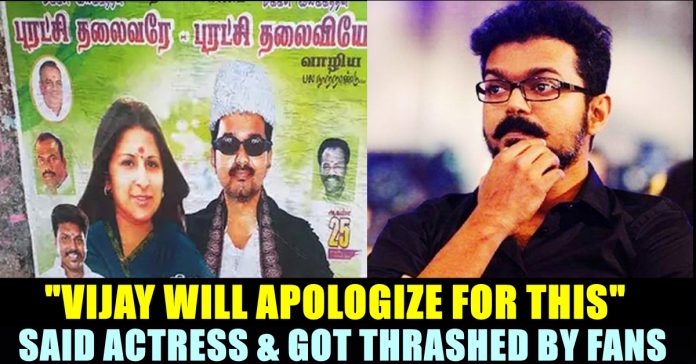 After the controversial poster which depicted actor Vijay as Puratchi Thalaivar “MGR” and his wife Sangeetha as former chief minister J Jayalalitha surfaced, Tamil based social media users tacked a bit aback as they didn’t see it coming. Vijay and Sangeetha celebrated their 21st year wedding anniversary on 25th of August and wished from all over social media poured for them. Meanwhile, fans of actor Vijay, out of immense love towards their, made a poster replacing MGR with Vijay which sparked controversy in social media.

Vijay got married to Sangeetha, one of his ardent fan in the year 1999. The couple is blessed with two children-son Jason Sanjay born in 2000 and Daughter Divya Sasha born in 2005. On the special occasion, fans of the actor expressed their emotion through tweets as well.

Check out some them below :

Something special bliss is to see they both laugh, smirk, and care each other. The way Vijay anna caring Sangeetha anni is always cutest ever❤️
Wishing Happy wedding anniversary to our King and queen. #Master || @actorvijay pic.twitter.com/dA2fna3VJt

Meanwhile, a fan went one step ahead and portrayed the couple as MGR and Jayalalitha which sparked the outrage. The poster was made and used in Madurai. “Gilli” Siva who is acting as a leader of Madurai South district volunteer team, created the poster according to sources. Dinamalar report has suggested that the posted has created a ruckus among the party members of ADMK which belongs to MGR and Jayalalitha.

Check out the controversial poster here :

On seeing this poster, amidst several reactions that emerged, Meera Mitun who considers herself as a rival of actor Vijay posted a tweet saying that Vijay will apologize soon for this poster like he did during “Thalaivaa” release issue. “This is gonna happen soon because of this poster” she said in her post only to get thrashed by the fans of the actor.

Previous articleLakshmi Ramakrishnan’s Plasma Requirement Post Went Wrong !! Here’s How She Replied
Next article“They Treated Us Like Terrorists” -MS Dhoni On The Biggest Turning Point Of His Life

Alia Bhatt Lost Her Cool After Seeing This Post About Her Pregnancy !!

Bollywood actress Alia Bhatt lost her cool after seeing a post of a media portal that said Ranbhir Kapoor is planning to fly to...