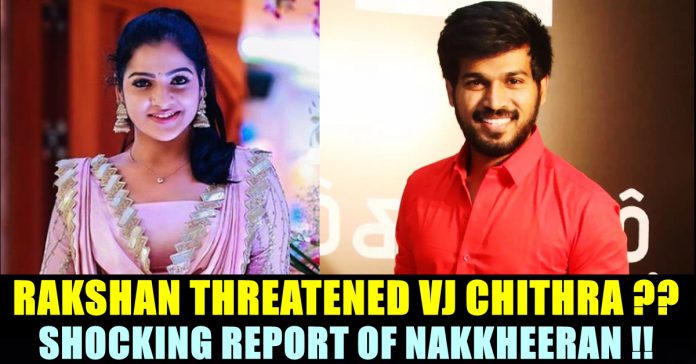 A shocking report of Nakkheeran emerged saying that Vijay Television fame Rakshan threatened Vj Chithra and could have caused the rift between Hemnath and Chithra. The report says that the “Kannum Kannum Kollyadaithaal” actor dated Chithra and threatened the actress by showing a video he recorded. Ganga Vaani, a friend of Chithra disclosed about the details, says the report.

Chithra’s husband Hemnath got arrested by the Police for abetting the actress to commit suicide. “Based on the outcome of the investigation carried out for the past few days, we have slapped section 306 of the Indian Penal code against Hemnath” said a Police official regarding the arrest of Chithra’s husband. He was arrested by the cops and was produced at the Poonamalle High court. He has now been lodged in Ponneri jail after being interrogated for six long days. Chithra and Hemnath registered their marriage two months ago and were planning to have a traditional wedding on January.

It is notable that the family members of Chithra alleged a foul play and demanded an investigation in the case. Reports suggests that Hemnath did not like Chithra performing intimate scenes in her serials and the reality dance shows that she used to perform. They had a nasty argument regarding the same. Earlier, it was reported that Hemnath dropped by the sets of Pandiyan stores and scolded her.

Chithra’s mother Vijaya firmly believed that her daughter would have never killed herself and demanded a fair probe. After the picture of her body surfaced, bruises were found in her face which made public to doubt the cause of her death. Now, to our shock, a report of Nakkheeran youtube channel has emerged disclosing about the statements provided by a number of friends of Chithra.

The report said that a close friend of Chithra named Rachel revealed about a past relationship of Chithra. “She was involved in a relationship with “Chinna Paapa-Periya Paapa” serial writer Karthik. They were planning to get engaged but ended their relationship due to unknown reasons.” said the friend of Chithra. After working in TV channels as anchor and artist, Chithra sent the picture of Hemnath to her friend Rachel and informed that she is going to get married to him.

After few days, Chithra complained about the strange behaviour of Hemnath to Rachel, according to the report. Hemnath doubted the character of Chithra and fought with the serial director of her in the shooting spot. Rachel talked with Hemnath to resolve the issue between himself and Chithra but he kept insisting that Chithra shouldn’t be acting in serials.

Another friend named Rekha nair had said that Hemnath approached her once. One more friend of Chithra named Ganga Vaani said that the death of Chithra is definitely a murder. She said that Chithra told her about the torture of Kumaran who acted with her in “Pandiyan Stores”, according to Nakkheeran.

Further, Ganga vaani reportedly said that Vijay TV fame Rakshan recorded a video of himself and Chithra when they dated each other and threatened the actress. “Chithra had a doubt on Rakshan that he could have shown the video to Hemnath” said Ganga vaani, according to Nakkheeran. “Rakshan and the son of a minister in Kadalur are thick friends.” she reportedly said.

Previous articleWhich Film Topped The List Of “Most Watched Direct OTT Release Of 2020” ?? Check Out
Next articleMukesh Ambani Shared About His Father’s Legacy To Mark Zuckerberg !!