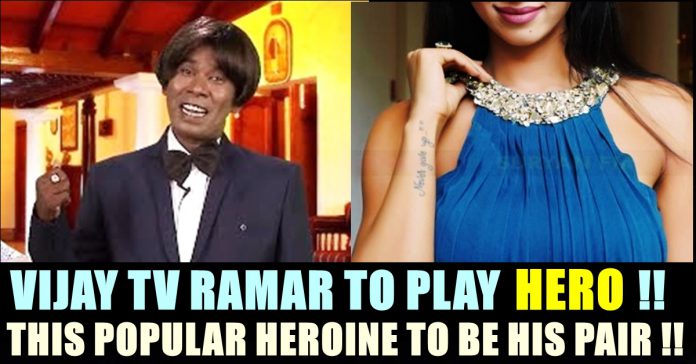 Many prominent actors of Kollywood cinema hailed from Vijay Television. Starting from Comedy actor turned protagonist Santhanam to one of the highest paid Kollywood star Sivakarthikeyan, number of people who worked in Vijay TV excelled in Tamil film industry. Ma Ka Pa Anand, Rio Raj, Priya Bhavani Shankar, Comedy actor Jagan are few others who were worked in the channel before making their debut in Tamil cinema.

Followed by them, to our surprise, comedy performer Ramar who is known for his presence in Vijay Tv’s game show Athu Ithu Ethu and comedy show Kalakka Povathu Yaaru is also going to make his Kollywood debut as a male lead. The actor already appeared in few films such as Vantha Rajava Thaan Varuven, Dhilluku Dhuttu 2, Comali in small roles.

The film which is titled as “Poda Mundam” is going to be a comedy entertainer with some fantasy elements according to sources. Sanjana Galrani, sister of actress Nikki Galrani is going to do the role of female lead in the film. Sanjana is an experienced actress who did more than 25 films in Kannada film industry. The actress who is super happy to sign up the project took twitter to make the official announcement. She wrote “Hi guys, Presenting the title of my debut feature film #PODAMUNDAM I’m so excited about my new journey in #Tamil cinema. a rib-tickling fantasy comedy sharing space with #KPYRamar. 8th film from @supertalkies banner”

Title look of Poda Mundam was released yesterday with a headless man sitting on it. Bigg Boss season 3 fame Reshma is also going to play an important role it seems. The actress shared the title look of the film in her official twitter account.

A pleasure knowing you personally and working with you@reshupasupuleti ji!
!!! You are an absolute asset to #podamundam movie!! https://t.co/x0AzkLPcK4

Ramar became the household of Tamil TV audience after he imitated popular actress Lakshmi Ramakrishnan’s mannerisms in a popular reality justice show “Solvathellam Unmai”. The phrase “Ennama Ippadi Pandreengale ma” went viral once he used it often during his performance in “Athu Ithu Ethu”. Later it was used in a song by actor Sivakarthikeyan who also belongs to Vijay TV.

After that Ramar started appearing in almost every show of Vijay TV including Super Singer to entertain the audience. Let us wish Ramar to have a successful debut and wish him all the best for a bright future !!

Bigg Boss Tamil show evicted a contestant after 14 long days as there was no eviction in last week. After evicting Kasthuri, wild card...