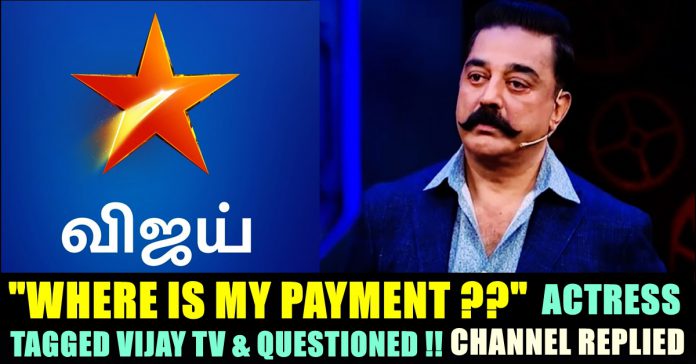 Actress Kasthuri who is expressing her political and social views through her official twitter account for quite a few years, recently posted a tweet accusing Vijay TV for not issuing her the payment for her Bigg Boss participation. Kasthuri entered the third season of Tamil Bigg Boss show as a wild card contestant. She got eliminated in the very first week she got nominated. Now, the actress posted a tweet saying that couldn’t believe this from the channel management.

Now, as the fourth season of the show is all set to inaugurate from 4th of October, Kasthuri posted the controversial tweet accusing the channel. In her tweet, she said that the channel has restrained from clearing the payment for over a year. The actress said that she participated in the show only for the operation expense of the manumission children.

“No words to thank Vijay TV who have withheld my payment for over a year. நான் பிக் பாஸ் நிகழ்ச்சியில கலந்துக்கிட்டதே manumission குழந்தைகளோட ஆப்பரேஷன் செலவுக்காகத்தான். I never believed any of your fake promises, but even I didn’t expect this.” read the tweet of Kasthuri.

No words to thank @vijaytelevision who have withheld my payment for over a year.
நான் பிக் பாஸ் நிகழ்ச்சியில கலந்துக்கிட்டதே manumission குழந்தைகளோட ஆப்பரேஷன் செலவுக்காகத்தான். I never believed any of your fake promises, but even I didnt expect this.

Now, replying to her accusation, Vijay TV has issued a statement saying that they are a responsible channel and are very mindful of making timely payments to everyone working on their shows as per the contractual terms. According to Indiaglitz, The channel said that the professional fees for Ms. Kasthuri Shankar for participating in the Bigg Boss show has been paid in December month of 2019.

However, the channel said that the GST amount payable towards the same, has been withheld by the channel management due to a mismatch in the actress’s GST filings. After receiving the required details and documentations, the amount will be cleared, the channel said. Vijay TV also said that Kasthuri failed to submit the invoice for her appearance on another show the channel conducted. “We couldn’t make the payments due to such reasons.” the channel reportedly said.

Previous article“Where Are Those Who Said Dupatta Will Save A Girl ??” Asked This Famous Personality !!
Next articleWATCH : The Most Wanted Video Of Dinesh Karthik Interacting With Varun In Tamil !!

Aasife Biriyani Owner Shedding Tears While Explaining Himself !! “Its A Complete Corporate Plan” He States !!

Aasife Biriyani is one of the prominent food restaurant in Chennai city which is well known for its unique taste and the Biriyani it...