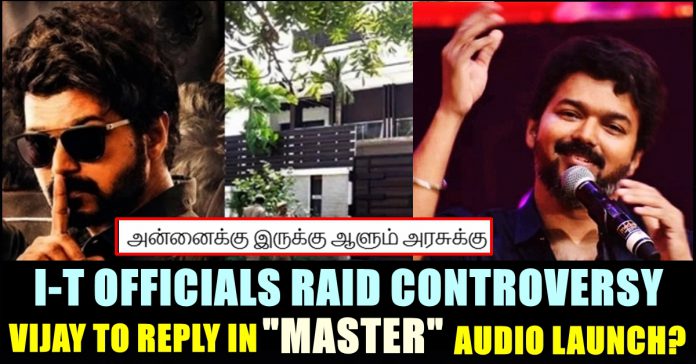 Director Rathnakumar who has directed films like “Meyadha Maan” and “Aadai” has reacted to the ongoing issue regarding the Income Tax raid in actor Vijay’s house. The filmmaker who is an ardent fan of the actor, is currently working in his upcoming film “Master” as dialogue writer and as additional screenplay writer. He is also a dear friend of director Lokesh Kanagaraj who is currently wielding the megaphone for the 64th film of the actor.

We all know that the audio launches of the movies of actor Vijay has got a whole new dimension since the actor started giving speeches addressing the social issues and motivational quotes. He who directly interacts with his fans only during the audio launch, also narrating them a short story in order to make them lead a successful life. His speech during “Bigil” audio launch is still making waves as he gave a powerful speech targeting the current politicians and their atrocities.

Now, in a way of reacting to this ongoing controversy, Rathnakumar, who is also a fan of the actor, wrote “Waiting for #Master Audio Launch🔥🔥🔥🤫” through his official twitter account. Check out his tweet below :

As soon as the tweet from the filmmaker surfaced, fans of the actor understood the hidden meaning of it and started reacting accordingly. “We are Also Madly Waiting For Thalapathy Speech Na #Master” wrote one fan whereas another fan wrote “You are right.. Our brother will surely address about the issue in the upcoming audio launch”

The recent report from the Income tax department has said that no cash seized from the house of the actor. Officials of Income tax department inquired actor Vijay in the shooting spot of director Lokesh Kanagaraj’s “Master”. The film which is going on floors at the coal mine in the Neyveli Lignite corporation, stopped due to the visit of Income Tax officers who breached into the spot to inquire actor Vijay. According to reports, the actor is currently being questioned by the officers.

This news of Income tax ride in actor Vijay’s house has instigated a big time debate among several set of people. While the fans of the actor are defending their idol, people also criticizing the entire film industry for being an industry which involves in tax evasion often. However, this tweet from Rathna Kumar has evidently proved that the actor is going to give a speech addressing this issue in the audio launch of “Master” !!

Previous article“Neethane” Song Is The Main Reason Behind IT Raid In Vijay’s House ?? WATCH
Next articleSanam Shetty’s Unexpected Statement About Abhirami Venkatachalam !! WATCH

The makers of Thugs of Hindostan have come up with an innovative way to announce the release of the film in Tamil and Telugu....