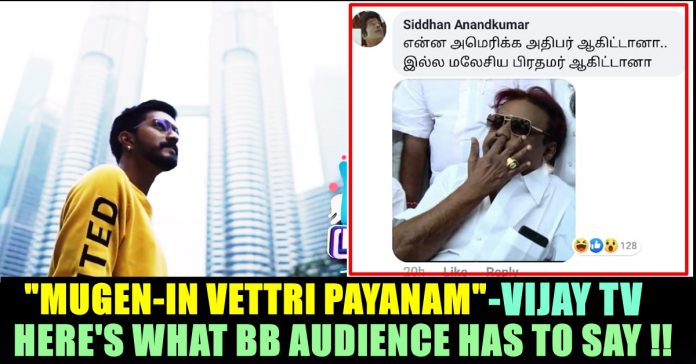 Vijay television is very well known for the reality shows it is streaming. From Jodi Number One, Kalakka Povathu Yaaru to Bigg Boss Tamil, the channel always surprised its audience and is being considered by fans as a pioneer for its competitors. Many of its shows were ripped off by other channels with different names about which the Tamil TV audience are very much aware.

The Bigg Boss show’s third season of the television became a huge blockbuster as it was hosted by Ulaganayagan Kamal Haasan. Reports suggests that he is going to host the next season as well. The first season of Bigg Boss was won by Aarav who acted as protagonist in a film titled as “Market Raja”. The film is expected to be released very soon. The second season of the show was won by Riythvika and she is busy promoting her upcoming movie “Irandam Ulaga Porin Kadaisi Gundu”.

The third season of the show was won by Mugen Rao, singer and model based on Malaysia. Having acted in many music videos, Mugen Rao is also expected to be very busy in Tamil film industry. Post Bigg Boss, Vijay Television conducted many shows by having the contestants of it. Starting from “We Are The Boys”, Vijay tv conducted a show named as “Bigg Boss Kondattam”. After the winner Mugen and Tharshan participated in the channel’s reality show “The wall”. After that the audience saw Mugen performing along with music director Anirudh in the finals of Super Singer.

Now Vijay tv has released a promo of a show which is named as “Mugen-in Vettri Payanam” (Mugen’s journey of success). In the promo we can see Mugen saying that belief is everything in life. “Beyond God, there is something called as Universe. I believe in it and has proved it as well. I hope you all follow it to get success in life. Be inspired and be an inspiration” he said in the promo.

Check out the promo here :

On seeing this promo, many thought that Vijay tv is exaggerating the success of the youngster in the 100 days show. Though they love Mugen for what he is, the viewers didn’t like the channel promoting him with unnecessary taglines. Check out some of their reactions below :

Followed by this, the channel added another promo video of the aspiring actor performing a song. Check out the promo here :

What do you think on these reactions received by Mugen ?? Comment your views !!

Previous article“Kaththi Or Mankatha ??” Asked Poll !! Venkat Prabhu Frustrated !!
Next articleNakkhul’s Wife Gives A Sharp Reply To Shut Down The Rumours About Her Personal Life !!

Keerthy Suresh was declared Best Actress at the 66th National Film Awards for her terrific performance in Telugu film Mahanati. The film, based on...

A video of a young girl performing Tik Tok video with India's national anthem running in the background is going viral in the social...