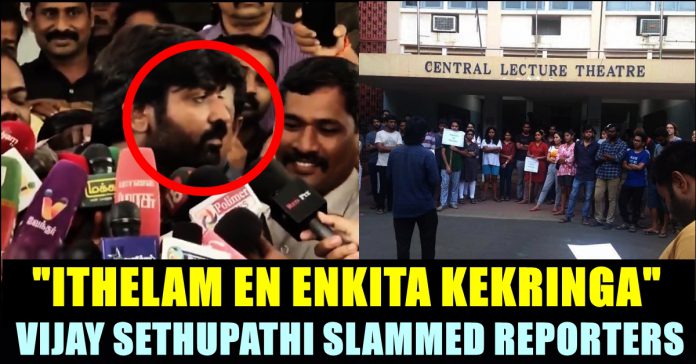 Vijay Sethupathi, one of the busiest actors of Kollywood industry, loved by majority number Tamil cinema fans for his natural way of delivering performances. Irrespective of his market and fan base, the actor is portraying various characters and concentrating in content oriented films. The actor who is very much known for his versatility, played role of a transgender in Super Deluxe, 70 year old theatre artist in Seethakadhi, Police officer in Chekka Chivantha Vaanam. He also played villain for Super star Rajinikanth in Petta movie which was directed by Karthick Subbaraj.

The actor who has handful of films in various stages of production so far, has faced the reporters yesterday after receiving Kalaimamani award from minister Ma.Foi. Pandiyarajan. His recent release Sanga Tamizhan ran to severe financial trouble which resulted in the movie getting delayed from releasing in theatres.

Sanga Thamizhan was supposed to release worldwide on November 15. Due to last-minute financial issues, the film couldn’t see the light of the day. Reportedly, distributor Ravinder Chandrasekar of Libra Productions had pending dues to pay to Vijaya Productions.

Since Ravinder couldn’t repay the dues, the film couldn’t release on November 15. After holding talks with Vijaya Productions, they decided to clear Sanga Thamizhan for release. Vijay Sethupathi’s film was screened in selected theatres on November 15 at 10:30 PM.

While talking about the matter to media Vijay Sethupathi said that reporters has nothing to do with it and the problem will not be solved by disclosing it to the media. On receiving Kalaimamani award Sethu said that he couldn’t get the award earlier as he was in shooting and thanked minister for considering him for the award.

Further one of a reporter asked Vijay Sethupathi about the suicide of a muslim student in IIT Madras. 19 year old Fathima Lateef was from Kollam, Kerala, and was admitted to IIT Madras in July. She was found dead on November 9. Death of the student created huge outrage in social media as her last note stated that one of a professor, Sudharshan Padmanaban is the cause for her death.

On being asked about this issue Vijay Sethupathi who couldn’t hold his nerve replied by asking why are they questioning him about those issues. “Why are you questioning about such things to me ??” asked the NRD actor.

The death of Fathima Latheef instigated debates in social media. Five days after suicide, the case was transferred to CBI. Earlier, Chennai police commissioner A.K.Viswanathan visited the campus and conducted an enquiry for a few hours.

Dhiwaharan Palani - July 10, 2020
0
All of our plans to improve our financial status in 2020 tumbled in front of our eyes due to this Lockdown implemented...