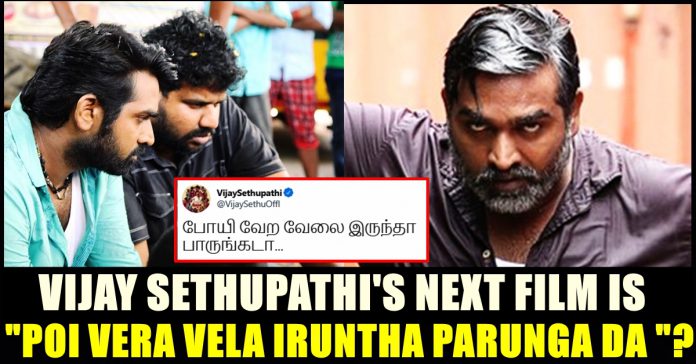 What actor Vijay Sethupathi said out of frustration is going to become a film it seems. Director C.S Amudhan who is the director of the only parody film franchise in Tamil film industry has asked his producer to register his tweet as title in Twitter. Vijay Sethupathi, for the first time, has posted a tweet, in a way of warning those who are spreading baseless rumours in social media platforms.

Sashikanth who just produced the 40th film of Dhanush, directed by Karthick Subbaraj, accepted the request of Amudhan by writing “🤣🙏🏼 …. 🥕…. ofcourse”

As soon as Vijay Sethupathi posted this tweet, it trended in twitter as hashtag with various kind of tweets. Ace cinematographer PC Sreeram, Actress Kasthuri Shankar, “Maanadu” Producer Suresh Kamatchi has reacted to this tweet of Vijay Sethupathi, in a positive way. Check out some of their reactions for his tweet here :

#VijaySethupathi
You said it, you said it right.

What do you think on these reactions for the tweet of Vijay Sethupathi !!

Upcoming Tamil film ’90 ml’ starring Oviya directed by Anitha Udeep and produced by Udeep has been censored with an ‘A’ certificate by the...