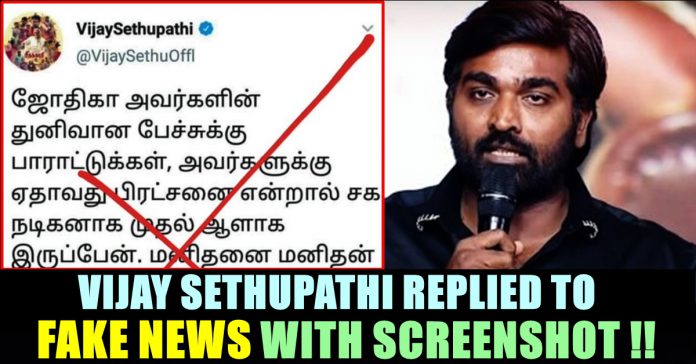 Vijay Sethupathi who earlier reacted to a fake news which said that he is trying to make people convert to christianity, came up with one more tweet to clarify another fake news about him. This time, he was forced to announce it as fake, as it was perfectly edited like a tweet from the original twitter account of the actor.

The fake tweet was written in a way of the actor supporting the speech of actress Jyothika in the JFW awards 2020. “Only Man can save his fellow man. God can’t do anything other than seeing them struggle. This is time for Temples to change as Hospitals” the fake tweet said. Vijay Sethupathi posted the screenshot of the same and labelled it as a “FAKE” one.

Check out some of the reactions to this tweet of the actor :

This rumour surfaced after the speech made by actress Jyothika went viral among the users of micro blogging social media site. “They asked me not to miss witnessing the grandeur of the temple. I have already went there. It was so beautiful that their maintenance is on par with the palace in Udaipur. Next day my shooting was in a hospital. It was very badly maintained and I couldn’t put words to what I saw in the hospital. My request is, people are spending lots of money in maintaining a temple and paying lot of money to temples as devotees. Please spend the same amount of money in building schools and hospitals.” said Jyothika amidst the loud applause of people from the auditorium.

Few months ago, Vijay Sethupathi who is known for speaking his heart out, has came up with a twitter post slamming the baseless rumours regarding the raid of I-T officials in the locations belong to popular personalities of Tamil film industry. The way he reacted to those rumours, trended as hashtag in Twitter and became extremely popular. The actor openly denied the rumours by writing “போயி வேற வேலை இருந்தா பாருங்கடா…” as caption to his post.

The screenshots shared by Vijay Sethupathi at that time alleged that Jeppiar’s daughter Regina is spearheading a Christian conversion movement in Tamilnadu. It said that the conversion did happen with the inclusion of actors like Vijay Sethupathi, Arya, Ramesh Kanna, Aarthi and few other top celebrities.

On the work front, Vijay Sethupathi is all set to appear as an antagonist in “Master”, “Upenaa” and as a protagonist in “Kaathu Vaakula Rendula Kaadhal”, “Laabam” etc.

Video Of Babloo Prithviraj Clarifying About His Alleged Secret Marriage!!

Video of actor Babloo Prithviraj clarifying about marrying a 23 year old woman is out. In the video, the actor was seen saying that...