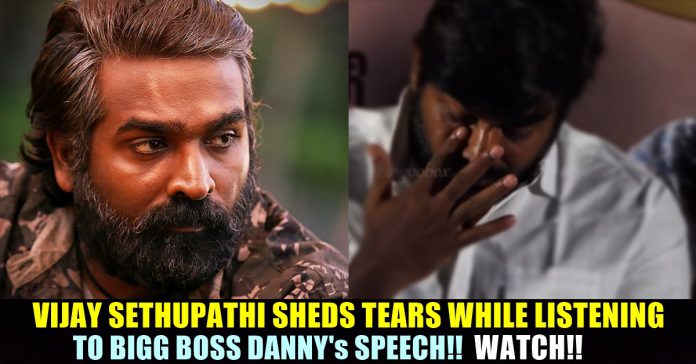 Recently a video of Vijay Sethupathi shedding tears has been uploaded on youtube channels. The press meet for the upcoming movie Laabam was held today. The press meet was held with a tinge of sadness.

Daniel in his speech has said, “I don’t know why, I just like him a lot. He’ll tease everyone.” And then he showed a picture of the director taken by him, reminiscing the words of the director. He also said, “I easily got connected to him.” “I wish the one who encouraged me had lived for a while.”

Ramesh Tilak, has said, “Jananathan sir is liked by everyone. I can do many movies with Vijay Sethupathi and other directors in the future. In 20 years I might not exist in the cinema or even in life, for that matter. After some time in life, when I think if I had done anything useful in life, I will think, I have done Jana Sir’s movie, it’s a very big success. I don’t think anyone can easily get to work with him. He has certain standards and policies in life. But no one can tease someone like him. We miss him. I am not telling this for the sake of the stage. He truly took care of everyone. I miss him calling by name. It doesn’t matter whether it’s a successful movie or not. This is Jananathan sir’s movie.”

The video of Daniel and Ramesh Tilak’s speech.