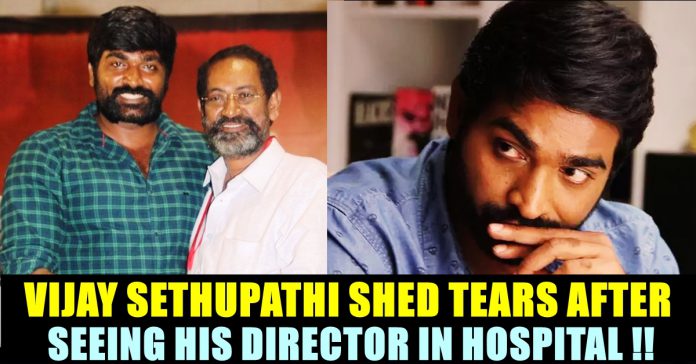 A news about the details on the incident of Vijay Sethupathi meeting his director S.P Jananathan at Apollo hospital is doing rounds in social media platforms. The actor who worked with S.P Jananathan in “Purambokku Engira Pothuvudamai” and in the upcoming “Laabam”, has always heaped high praise for the filmmaker while mentioning about him in public interviews. Now, it has been reported that Vijay Sethupathi shed tears after trying to wake his director up at the Apollo hospital.

Director SP Jananathan who is known for directing significant films such as “Iyarkai”, “Peranmai”, “Porampokku” found unconscious at his residence and was taken to Apollo hospital on Thursday. Recently, reports emerged saying that the filmmaker got passed way without responding to the treatment. However, director Ameer and Karu. Pazhaniyappan came up with updates informing that the “Ee” filmmaker is still getting treatment and asked people not to spread rumours. The filmmaker was in observation with ventilator according to his close friend Azhagan tamizhmani.

The filmmaker was reportedly editing “Laabam” movie on Thursday and left the studio to have lunch. When he didn’t return for a long time, his assistants went to his home and found him lying unconscious. In a way of clearing the air about the health conditon of the filmmaker, director Ameer released a statement asking people not to spread false information.

Director Karu. Pazhaniyappan, in his tweet said “SP Jananathan is still getting treatment. Specials including Doctor Ramanarasimman, Doctor Srinivasan, Doctor Murugan have started operating. Get well soon friend. We have a lot of works to do”.

Now, a report surfaced saying that actor Vijay Sethupathi, after completing the shooting of his film, visited Apollo hospital and met his director at 12 AM of Friday, according to Cinema Vikatan. “Kadhal” Saranya who was working in the office of the filmmaker said that Vijay Sethupathi tried to wake S. P Jananathan up by tapping him.

Saranya said that the filmmaker helped her to overcome the inferiority complex she had when she was affected by hormone imbalance. “He took care of my medical expenses and he offered me a job in his office. I was planning to surprise him by revealing the growth in my health condition” said Saranya, according to Cinema Vikatan.

“Vijay Sethupathi visited him on the night of Thursday. He tried to wake him up by tapping him. When people who were present there asked him why he is hitting him so hard, Vijay Sethupathi got angry and said that S.P.J is his director and believed that he would wake up if he hear his voice. But our director didn’t wake up. Vijay Sethupathi said this is what life is and left the place shedding tears” Saranya said.

Previous article“Mumbai Indians Are Better Than Team India” – Mocked This English Player !! Got Trolled
Next article“He Will Live Through His Films” – Entire Film Industry Mourned For The Demise Of Director SP Jananathan !!

“They Mocked, They Criticized & They Suppressed” – Sanam’s Tweet About Actor Vijay Goes Viral !!

On Thursday, Sanam shetty conducted a question and answer session with her fans and followers in Twitter and answered to many of their questions...

Sivakarthikeyan Asked VP To Tell The Story Of Their Film!! Director’s Reaction Is Epic

Ahead of the release of his upcoming film "Prince", actor Sivakarthikeyan conducted a chart session with this Twitter followers. While he was answering  to...