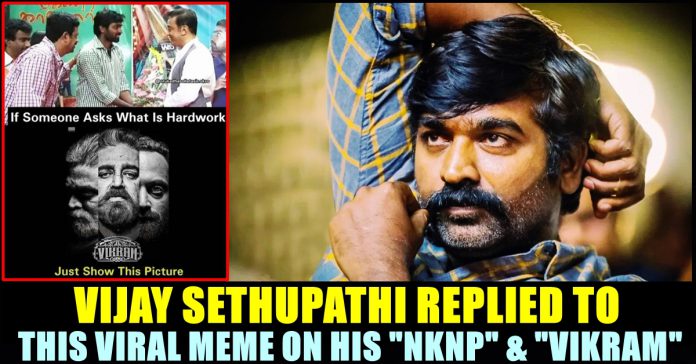 Vijay Sethupathi who is currently active appearing in films across the nation, is going to host a show in SUN TV named “Master Chef” and appeared in the promotional interviews of the show. The actor talked about sharing screen space with Kamal Haasan in the upcoming film “Vikram” which is going to be directed by Lokesh Kanagaraj and also replied to a viral meme which compared the two pictures of Vijay meeting Kamal Haasan in person during the early days of his career and playing villain for him now.

The most awaited first look of Ulaganaayagan Kamal haasan’s upcoming film “Vikram” directed by Lokesh Kanagaraj released in Internet on 5 PM of Saturday and became a point of discussion among the fans of Tamil cinema. When people were presuming that Vijay Sethupathi or Fahad Fazil might play villain in the film, the filmmakers came up with a surprise announcing that both of them are going to feature in the film. The first look showed all the three of them in a monochrome effect with Kamal Haasan and Fahad fazil facing the camera while Vijay facing the earth.

Vijay Sethupathi who shared screen space with Rajinikanth and Vijay in “Petta” and “Master” respectively, is going to act with Kamal Haasan for the first time in “Vikram”. The film is bankrolled by Kamal Haasan himself under Raaj Kamal Internationals and the music of the film is going to be composed by Anirudh Ravichander. After it was announced that Kamal, Vijay and Fahad are going to play leads, expectation level for the film raised sky high.

Meanwhile, a number of fan pages of actor Vijay Sethupathi uploaded a post comparing the two pictures of Vijay Sethupathi meeting Kamal Haasan during his early days and himself featuring in the poster of “Vikram” along with the actor. Caption of the post read “If someone asks what is Hard work, just show them this picture”

“I don’t know whether it is hard work but I didn’t expect this to happen. During Soodhu Kavvum, Kamal sir called everyone and wished. At that time, I was at Madurai in “Pannayarum Padminiyum” shoot. I couldn’t meet him and felt really bad.” said Vijay Sethupathi and shared his experience on talking with Kamal for one hour regarding “Vikram”.

“It was an amazing experience and it is hard to get it. No book can teach the lesson we gain while working with the legendary actors who has years of experience. His (Kamal) sense is totally different. It is us who find it difficult to understand him but he has a deep vision. I didn’t talk with him. He talked and I listened. What’s there for me to talk with him. We talked about his experience and the actors, films he came across. He also performed a scene from a Malayalam film for us and it was so casual and effortless” said Vijay and added that he is waiting to work with Kamal Haasan and Fahad.

Previous articleJUST IN : Court Imposed Rs. 1 Lakh Fine For Actor Vijay !! Here’s Why
Next articleHashtags Trending At National Level For The Judgement On Vijay’s Rolls Royce !! CHECK OUT