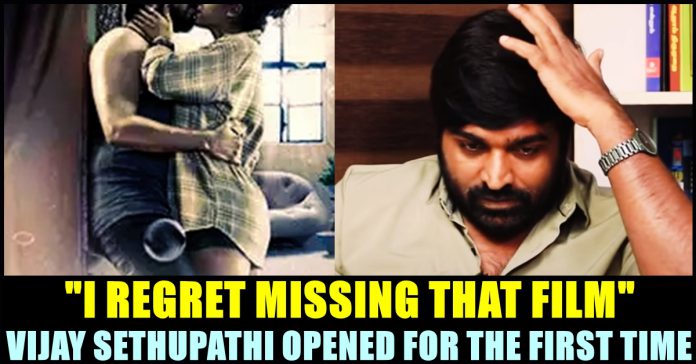 Four films of actor Vijay Sethupathi are likely to release in September month and the actor is having nearly a dozen number of films going through various stages of production currently. In a recent interview with a youtube channel, the 42 year old actor opened on a couple of films he missed and expressed his regret over missing the opportunity of acting in one of those films. Irrespective of the character and his image, Vijay Sethupathi has been acting in many films. He did a cameo in “Oh My Kadavule” as a “God” and has accepted to do special appearances in films like “Pisasu 2”, “Michael”, “Viduthalai”, “Mumbaikaar” etc.

He acted as a villain for Madhavan in “Vikram Vedha”, for Rajinikanth in “Petta”, for Vijay in “Master”. The actor is also roped in to act as villain for Kamal Haasan in “Vikram” which is being made under Rajkamal films International. It is also notable that Vijay is concentrating in other languages such as Telugu, Hindi etc.

Ahead of the release of his films “Anabelle Sethupathi”, “Laabam”, “Tughlaq Darbar”, Vijay appeared in an interview and answered to as many as questions he was asked. He also opened about the film he missed and expressed his regret over it.

The film “Ispade Rajavum Idhaya Raaniyum” stars Harish Kalyan and Shilpa Manjunath in the lead roles. It revolves around an unemployed youth who is involved in a romantic relationship with a girl who belongs to elite class. Music composed by Sam C.S, the film was directed by Ranjith Jayakodi who directed Vijay Sethupathi in “Puriyatha Puthir”. “Kaithi” is a film that revolves around a prisoner who just got released from jail. He is forced to help a higher official of police department in capturing a gang which is involved in drug dealing.

Throughout the interview, the actor talked about many other aspects of his personal and professional life. Vijay Sethupathi who is known among cinema audience for providing some quality films, has separate fan base for his sensitive speeches as well. A set people has always expressed their admiration over the maturity and clarity the actor provides through his speeches that takes place in the public events, audio release functions and interviews.

Previous articleSuriya’s Heroine Inspiring Internet With Her Physique!!
Next articleSun TV Getting Trolled For Flooding Advertisements During “Tughlaq Darbar” Premiere !!

While the cinema celebrities of entire country expressing their anger towards the incident that took place in Sathankulam of Thoothukudi, Tamil actor Vivek's tweet...

The Bigg Boss Tamil house was in a mess on Wednesday as the housemates performed the cops and robbers task. The team that was...

A. R. Rahman, is an Indian music director, composer, musician and singer. His works are noted for integrating Indian classical music with electronic music,...