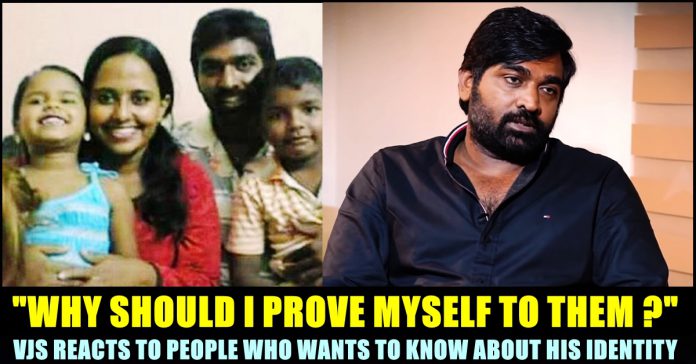 Vijay Sethupathi who is known among cinema audience for providing some quality films, has a separate fan base for his sensitive speeches as well. A set people has always expressed their admiration over the maturity and clarity the actor provides through his speeches that takes place in the public events, audio release functions and interviews. In this recent interview which was made to promote his upcoming films “Laabam”, “Tughlaq Darbar” and “Anabelle Sethupathi”, Vijay reacted to people who despearately wants to know about the identity of the actor.

“I feel like saying “Poda Vennaingala” ( Get Lost, idiots) to them. I want to ask them whether they don’t have any other job to do” Vijay Sethupathi said. “They said Tamil is not my language. They also said something about my religion. To prove them wrong, I have to tell them my caste or I have to tell them about my family temple. If I tell them my caste, they will find out whether I am a Tamilian or not and about my religion and other things” said Vijay in the interview.

“Why should I prove myself by telling them these details ? I don’t care about what they are thinking about me anymore. The one who spreads such information has a gain in it but the one who believes getting fooled here.” Vijay Sethupathi expressed his dejection.

On the work front, Vijay Sethupathi is going to see four of his films getting released in September month which includes “Anabelle Sethupathi”, “Laabam”, “Tuklag Darbar”. Many other projects of the actor such as “Kaathu Vaakula rendu Kaadhal”, “Maamanithan”, “Vikram” are in various stages of production. Comment your views on the way Vijay handled people who are living a life out of the existence of caste and religion !!