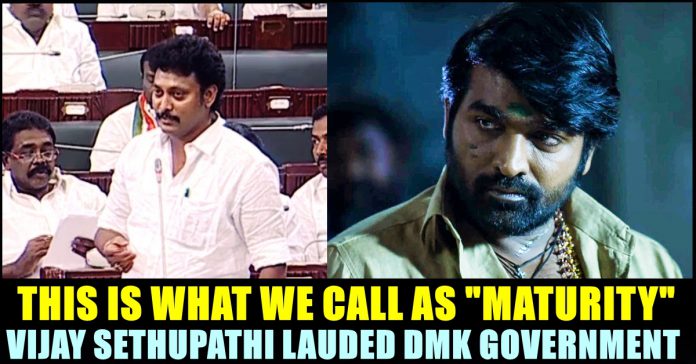 Actor Vijay Sethupathi, while participating in the promotional interviews for his upcoming film “Laabam”, answered to a question on how the current government is performing for the wellbeing of the state. The “Pizza” actor lauded the MK Stalin led government with his whole heart and talked about how happy he feels while watching the video of assembly meetings. He referred to a recent incident where Anbil Mahesh, Minister for School Education in Tamil Nadu, talked about Chief minister’s egoless act of saving Rs. 13 crore by retaining the photos of former AIADMK chief ministers J Jayalalithaa and Edappadi K Palaniswami on 65 lakh school bags.

In the Tamil nadu assembly elections 2021, The Stalin led DMK won 125 seats with four from the MDMK, two from the MMK, one each from the TVK and KNMK winning on the DMK’s rising sun symbol. In total, the party succeeded in 133 constituencies out of 234. Ever since taking the oath, MK Stalin has been involved in making his election promises the the practice. Schemes like free bus tickets for women and transgender, Non-Brahmin Priests, petrol price reduction, and other health and welfare schemes have added laurels to the Government.

In a recent interview, actor Vijay Sethupathi who is known for acting in films such as “Pizza”, “Soodhu kavvum”, “Vikram vedha”, was asked to answer on how the government has performed in the 100 days. “I have been watching the videos of Legislative assembly in youtube. To be frank, it feels good. I really like it and many like it which I saw through the comments of Youtube” Vijay said in the interview.

“I would suggest people to watch the videos of assembly. It is not to support any party but it will give us an idea about what’s really happening around us.” he said and went on to talk about the incident that involves minister Anbil Mahesh. “For a long time, we haven’t witnessed such politics” he said referring to Chief minister MK Stalin’s decision on retaining the pictures of former AIADMK chief ministers J Jayalalithaa and Edappadi K Palaniswani on 65 lakh school bags to save Rs. 13 crore.

“Arresting the DMK cadres who destroyed Amma Canteen is a good gesture as well.” the actor said. “The thought of spending Rs. 13 crore in other schemes and retaining the pictures of the former chief ministers is something we call as maturity. It is not something to be celebrated but it is what we should call as “Maturity”. I appreciate that quality of our chief minister” Vijay Sethupathi said in the interaction.

Previous articleVijay Sethupathi Sheds Tears On Stage!!
Next articleCops Getting Trolled For Performing “Bella Ciao” Ahead Of Money Heist Release !!