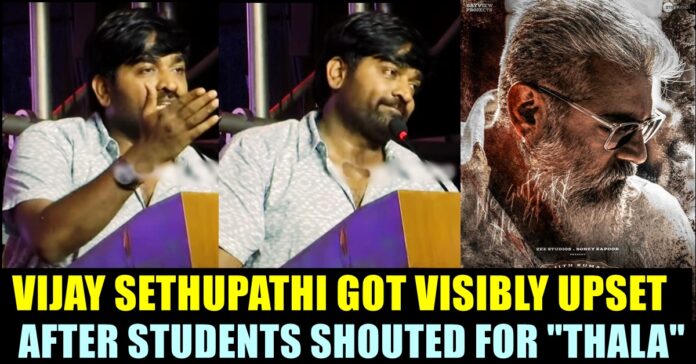 Actor Vijay Sethupathi who is currently busy acting in minimum a dozen number of films, attended an event that took place at Loyala college and delivered a speech for the students. While the actor was talking about the importance of “listening” skill, he happened to utter a famous Thirukkural that starts with “Selvathul Selvam”. To explain the Thirukkural, the actor said that Thiruvalluvar terms “listening” skill as “Thalai” (head) to denote it’s importance.

However, a number of students started shouting as soon as the actor said “Thalai”, a term which is widely used to mention actor Ajith kumar who enjoys huge fan base among youngsters. Vijay who got upset, visibly expressed his displeasure and paused for a moment before continuing his speech.

In the event, Vijay Sethupathi could be seen delivering a speech in order to make the students grow in a better way. “Everything you study won’t help you in real life. Getting to maintain a relationship with different kind of people gives you more knowledge. Don’t express your anger to others all of a sudden. Many people with whom I expressed my anger are my friends now. Just because you grew physically, it doesn’t mean you grew mentally” the actor said to the students.

“The business world is ready to steal your time. They are waiting to use your creativity. Don’t believe the fake freedom that social media gives you” said the actor and explained about how marketing works in the digital world. “Get to know about the origin and process of everything” the actor further said.

Further, Vijay Sethupathi talked about the importance of listening sense. “My most favourite Thirukkural is “Selvathul Selvan Sevichelvan Achchelvam Selvathul Ellam Thalai”. No matter what you belief is but every religion and meditation centre says only one thing and that is “listen to yourself breathing”. If we question why Valluvar mentioned listening sense as “Thalai” (head)” the actor said and got interrupted by a student who shouted to express his love towards actor Ajithkumar.

Responding to him, Vijay Sethupathi said “Hey, don’t shout unnecessarily. What are we talking about ?? Ponga pa” to express his frustration. However, he continued explaining the Thirukural after a pause.

On the work front, Vijay Sethupathi is expected to be seen in films such as “Merry Christmas” , “Vidudhalai”, “Gandhi Talks”, “Mumbaikar”, “Jawan” etc.

Abirami Mega Mall To Be Closed From February For Its Renovation !! Check Out Their Official Release !!

Abirami Mega Mall is a shopping mall located in Purasawalkam , Chennai. It was constructed in 2003. It is named after its owner Abirami Ramanathan. It also...

The trailer of Thackeray, based on the life of Shiv Sena founder, late Bal Thackeray, has stirred row over its controversial dialogues. Actor Siddharth has...

Indian Premier League (IPL) of 2019 is not only full of exciting matches but also is lined up with many controversies and infamous comments...

Famous Comedy Actor & Blacksheep Owner RJ Vigneshkanth Is All Set To Get Married!!

RJ Vigneshkanth who is known for appearing in a number of films as comedy actor, is all set to get hitched. Engagement ceremony of...