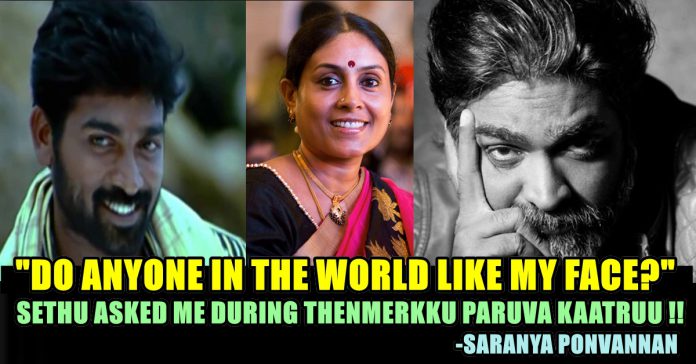 Vijay Sethupathi Asked “Do Anyone In The World Like My Face??” To Me While “Thenmerku Paruva Kaatru” Says Saranya Ponvannan !!

June 13 saw the trailer and audio launch of Vijay Sethupathi’s upcoming film Junga. Starring alongside Sayyeshaa and Madonna Sebastian, Vijay Sethupathi will be seen playing the role of a don. Yogi babu is also playing a pivotal role in this film.

From the trailer, we can see that the film has been shot in India and in Paris. Vijay Sethupathi is seen sporting two distinct looks in the film.

Idharkuthane Aasaipattai Balakumara gave rise to famous dialogues – ‘Kumudha happy annachi’ and ‘friendu… love matteru…’ On being asked if Junga too will have sensational punch dialogues, Vijay Sethupathi responded by saying that such punch dialogues are usually picked up by the audience and that the team has not worked with ‘punches’ in mind. Speaking at the audio launch, actor Saranya Ponvannan, who plays Vijay Sethupathi’s mother in the film, shared that the two of them had last worked together in Thenmerku Paruvakatru eight years ago. “I remember, he had once asked me with a lot of doubt, ‘do you think people will like my face?’ Today he’s grown to a place where I’ve received my salary from him. He truly is Makkal Selvan,” said Saranya.

The film’s teaser that released in January this year created a buzz among fans. Vijay Sethupathi was last seen in Oru Nalla Naal Paathu Solren. The actor has seven other films slated for release this year in addition to Junga.