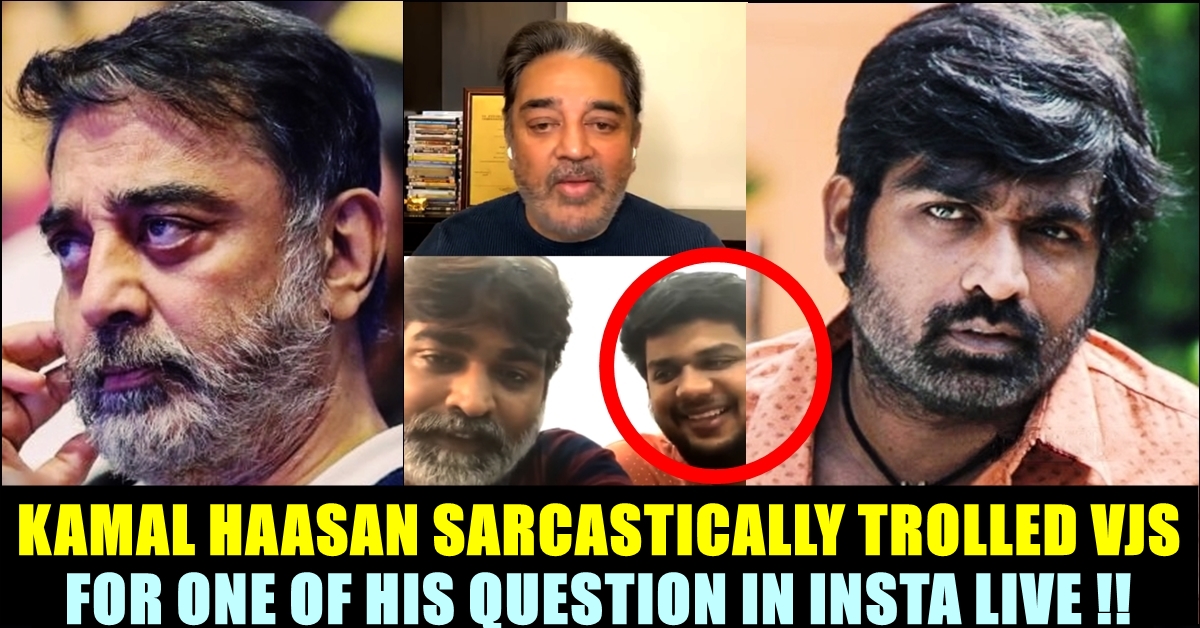 For the first time in history, “Ulaganayagan” Kamal Haasan participated in an Instagram live session with “Makkal Selvan” Vijay Sethupathi. The 90 minutes interaction was hosted by Abhishek Raja of “Open Panna” youtube channel. In the live session, Vijay Sethupathi expressed his admiration towards the epitome of Tamil cinema and asked few questions on behalf of fans and his fellow actors. Vijay Sethupathi seeked the legendary artist’s advice regarding many aspects of Tamil film industry.

Vijay Sethupathi who attended the 60th year celebration of Kamal Haasan in Tamil cinema said that he wish to work with him to learn many things in cinema. Now, in this interaction, he didn’t stop asking about cinema alone but also shot some questions regarding his personal life and political career. Interestingly, the conversation between the duo started when Kamal Haasan asked “Nan oru Kadha Sollatumaa?” to Vijay Sethupathi, in a way of referring a famous dialogue of Vijay Sethupathi from his blockbuster film “Vikram Vedha”.

Kamal Haasan shared many of his experience from his personal life and from his cinematic career to Vijay Sethupathi through this live interaction. When Vijay asked how Kamal Haasan is handling criticism on works he puts most of his efforts, the “Virumandi” actor said that he never minded criticisms. “When a guy falls in love. He is in love that’s it. No one can stop him. If his parents tries to stop him, he will elope. That is how my work is to me” he said.

Vijay Sethupathi even conversed with Kamal Haasan about having rehearsals before going for shoot. He even asked how the idea of Aboorva Sagotharargal surfaced at first to which Kamal Haasan said that he got inspired from a single shot of Charlie Chaplin in which he would act as a dwarf. They also talked about the veteran actor Chevalier Shivaji Ganesan and the way he practiced for his shots prior to shoot.

The most interesting part about the interaction is when Vijay Sethupathi apologized to Kamal Haasan for asking a question to him. At one point Vijay asked Kamal Haasan to communicate with people with simple vocabulary and in easier way for their better understanding. There is a popular opinion among people that Kamal Haasan is someone who would confuse people with his complicated statements and tweets. While answering to the question of Vijay sethupathi, Kamal Haasan said “If Kalaignar or Avvaiyar or Bharathiyar or Bharathidasan panicked to make people understand their works, they would have lasted only as Cinema song lyricists, not as revolutionists” to which Vijay Sethupathi replied with a silence followed by a “Sorry sir”.

Watch the video below from 1 hour 10th minute :

The duo went on to discuss about many other things including Kamal Haasan’s political stint. When Vijay Sethupathi asked why Kamal took so much time to enter politics, the Makkal Needhi Maiam founder said that he waited for a right time. “I waited for myself to reach an respectable age” he said.

Comment your views on this interaction between these two most unavoidable actors of Tamil cinema !!

Actor Prasanna Facing Trouble For Supporting DQ !!
Ajith Kumar’s Unexpected Gesture After Drinking Tea With This Family In Their Hut !!