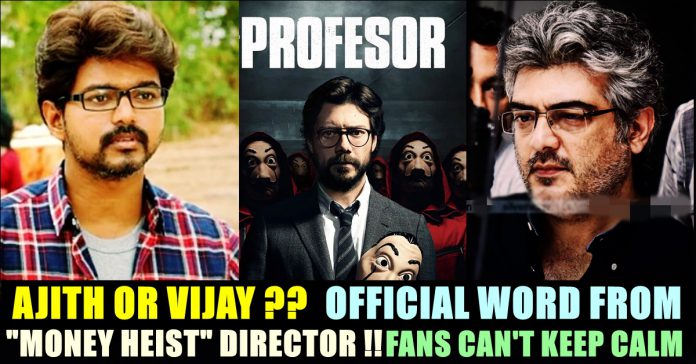 Director of the popular online streaming show “Money Heist” appeared in an interaction with a popular Tamil youtube channel and answered to a million dollar question. He was kept in a position by the anchor to choose few of the top Indian actors for the roles of his show “Money Heist” which became a superhit in country India. He was given Vijay, Ajith, Suriya, Shah Rukh Khan, Mahesh Babu and Ranveer Singh as choices.

Fans for La casa De papel aka Money Heist is increasing in India in daily manner. As the fourth season of the series released recently, people of the country who finding ways to kill the Quarantine boredom, started watching the series in Netflix it seems. We have been witnessing many memes and videos in social media platforms regarding the series for past few days.

The series which garnered fans from all over the world with its previous three parts, didn’t fail to impress its followers in the fourth part as well. With compelling characters, chronological narrative structure and most importantly the intricate heist which makes the viewer to reach the edge of his seat for every scene gained the series a global level acclaim.

Binge watchers from our country are no exception which is evident through the memes and write-ups surfacing in social media platforms regarding the series since the release of the fourth part. Their obsession towards the series went too far that they started comparing the lead characters of the series with their favourite stars. Now, Alex Rodrigo who directed the show with ensemble cast, has answered to the question after all these days.

As soon as Alex declared Vijay as “Professor”, fans of the actor couldn’t keep calm as they can be seen celebrating it in the Facebook and Twitter. Many posters and designs regarding the same are surfacing and we can also see few troll posts from the fans of other actors.

Comment your views on this decisions made by Alex and the reactions it is receiving !!