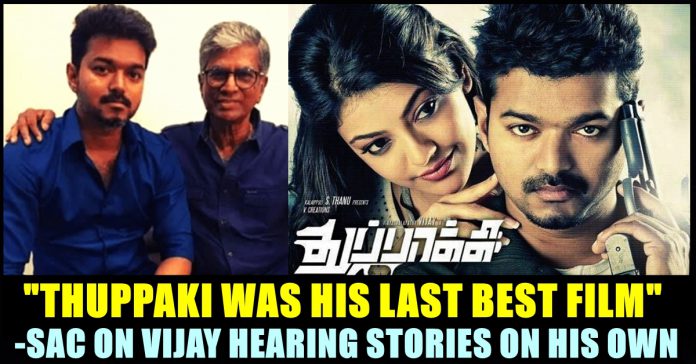 Director S.A Chandrasekhar, father of actor Vijay, interacted with a news channel recently and talked about the recent issue that took place between himself and his son regarding the Political party of the latter. Recently, a report on Actor Vijay filing a case against 11 members including his parents to prohibit the use of his or his fan club’s name for political reasons surfaced.

“Through this statement, I am making it clear that I won’t be controlled by that party in the future. Further, I request my fans not to join themselves with that party or to work for it. That party has nothing to do with our club” Vijay firmly said. The “Bigil” actor also warned that strict action will be taken against those who are using his name or his photograph or his All India Thalapathy Makkal Iyakkam for any mischief.

Now, SAC, while interacting with News 18, had talked about the issues that are taking place between himself and his son. While answering to the questions, SAC said that Vijay never got a good screen play after “Thuppakki”, irrespective of the collections his films made. The filmmaker said that none of his films after “Thuppakki” contained good screenplay.

Vijay is currently working on a project named “Beast” directed by Nelson Dilipkumar, shooting of which is underway. He has been committed in a bilingual project in the direction of Vamsi Paidipally which is tentatively titled as “Thalapathy 66”. “Thalapathy66… Sharing with you all an exciting update about my next film with The #Thalapathy @actorvijay Sir, Produced by #DilRaju garu & #Shirish garu under my home banner @SVC_official” the filmmaker said while announcing about the same.

#Thalapathy66… Sharing with you all an exciting update about my next film with The #Thalapathy @actorvijay Sir, Produced by #DilRaju garu & #Shirish garu under my home banner @SVC_official pic.twitter.com/R24UhFGNlW

Previous articlePhotographer Deleted 600 Marriage Photos After Being Denied Food At A Wedding !!
Next articleAshwin Opened On The Recent Controversy For The First Time !!

For The First Time, Kajal Agarwal Posted Her Picture Without Make Up !! Her Followers Lauding !!

Ever wondered how Kajal will look without makeup? Well, the actress posted a picture of herself without makeup in her official social media accounts....

Popular journalist Nakkheeran Gopal has questioned what happened to the four accused in Pollachi rape and blackmail case. The journalist who bought the case...