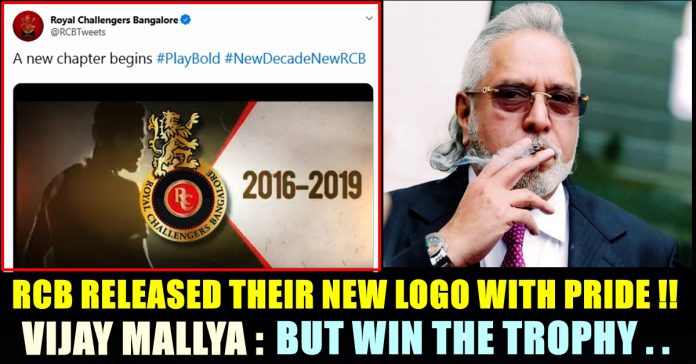 Royal Challengers Bangalore changed their logo after 5 long years and announced about as a surprise to its fans by removing the display pictures and posts from their official social media accounts. Royal Challengers Bangalore, the IPL franchise with enormous number of fans made it to the headlines recently after its captain’s remark on their twitter handle’s strange activity. The official twitter handle of the popular IPL team is very much known for its witty posts and sarcastic replies to its followers. After being questioned by its prominent players for removing the posts, RCB came up with a brand new logo for their team for the upcoming season of the IPL tournament.

Having more than 36 lakh followers, RCB replied to its captain and followers by releasing a video. “All good, Cap! Every amazing innings begins from 0* and we’ve just gotten off the mark 🙏 #NewDecadeNewRCB” replied RCB to Kohli after becoming active.

All good, Cap! Every amazing innings begins from 0* and we've just gotten off the mark 🙏 #NewDecadeNewRCB

They also replied to Chahal, De Villiers through their twitter account. The video RCB uploaded showed how the team emerged with different logo all through the years. The team which is being led by the national team captain for past several years hasn’t won the title for a single time since the inaugural season of the tournament.

Check out the video they uploaded with a caption “A new chapter begins #PlayBold #NewDecadeNewRCB” here :

To this video, popular business icon and the former owner of the team, Vijay Mallya gave a cheeky reply. Being a former MP, Vijay Mallya is the subject of an extradition effort by the Indian Government to return him from the UK to face charges of financial crimes in India. Knowing very well about his team’s performance in the past twelve seasons, Vijay asked the team to win the trophy.

This tweet from Mallya which is receiving hilarious reactions, has garnered more than two thousand five hundred likes from the twitter users. Followed by this, Mallya kept replying to the posts of RCB, in a way of insisting them concentrate on winning the trophy. Check out his other replies below :

Sure..Roar load like a Lion but bring the IPL trophy home to Bangalore. https://t.co/Ix3bhoOIlG

Correct…you are not done yet. All RCB fans want the trophy. https://t.co/7I09bBFtSa

Congratulations. Hope this helps in winning the IPL https://t.co/fy54wt3mNH

Virat came to RCB from the India U 19 squad. Virat has led India to great success and has been an outstanding performer himself. Leave it to him and give him the freedom. All RCB fans want that long overdue IPL trophy. https://t.co/RT7cNdWgWN

Seems Mallya is eagerly waiting for RCB to win the trophy more than the fans who went to New zealand with a placard saying “Ee Sala Cup Namde”. Comment your views on these replies of Mallya !!

Previous articlePrabhu Deva Missed To Act In This Blockbuster Film Because Of This Reason!! WATCH
Next articleMugen Rao Posted Cozy Pictures With His Girlfriend !! Abhirami Reacts

Dentist turned IPS Officer Dr. Varun Kumar who is serving as the Superintendent of Police for Madurai, grabbed the headlines of leading media portals...