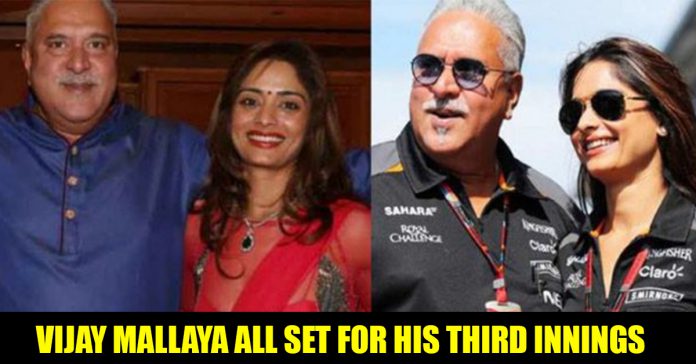 Vijay Mallaya To Get Married For The Third Time In London : Here’s The Full Details !!

Vijay Mallya was popularly known as the liquor baron of the country. He flew away from India after committing a fraud of 9000 crores. Though he’s living lavishly in his estates in London Indian government couldn’t bring him back to the country. He was arrested once in London but got bailed in less than 3hours. After that, there were many updates about him being extradited, but nothing worked out. Once again Mallya is making it to the headlines with the rumors of his third marriage to Pinky Lalwani. Pinky Lalwani is a former air hostess, who joined Kingfisher airlines due to Vijay Mallya. They gradually became friends which turned into love. Looks like Vijay has a special spot for air hostess as his former wife, Sameera Tyabjee was also an air hostess. Earlier, Mallya had also tied knot with Rekha Mallya. She is his current wife. Pinky Lawani has always been together with him and they have even celebrated their anniversary of togetherness. Now it’s being heard that Vijay is all set to tie the knot with Pinky Lalwani in London, who stood by him through thick and thin. She flew away to London on the same day as Mallya and was seen constantly with him. Pinky was also spotted at Westminster Magistrates Court London. As far as Mallya’s extradition process is concerned, it is being heard that though Mallya is brought back to the country, he won’t be able to pay back his debts easily as there aren’t any liquid assets. Apart from owing to banks Mallya also owes 300crores to his employees as outstanding wages.

Moreover, experts say that Mallya’s personal property will be held liable only if the banks or the employees get successful in proving his hand behind the fraudulent activities which is a tough task.

“Even if he gets back or is brought back to India, in order of his personal assets and properties to be answerable for his loan taken by kingfisher, they will have prove that he was fraudulent in his conduct or he diverted funds. they have to prove that he misused the position as the director and the management of kingfisher airlines unjustly and illegally to enrich himself” says the expert.

Previous article10 Unknown Facts About Prakash Raj That’ll Make All Of Us Go WoW!
Next article12 Ridiculous Photos That People Must Stop Posting On Social Media !!

Raiza Wilson Got Hurt In A Bizarre Selfie Accident !!

We have heard advices from our elders regarding the harmness that social media could cause to an individual and about how it will ruin...

Chennai Police are giving their everything to make people stay home. Few days ago, we saw a traffic police shedding tears while requesting people...