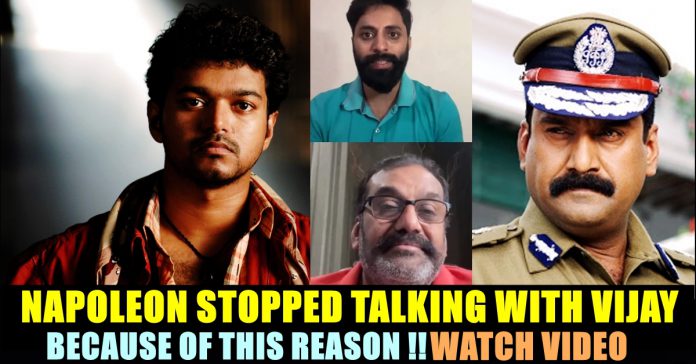 Veteran Tamil actor Napoleon who is known for the roles he did in Tamil films, has opened on his relationship with actor Vijay in one of his recent interaction with a popular youtube channel. The actor who is currently busy acting in Hollywood films, participated in the interaction to promote his Hollywood film Devil’s Night : Dawn of the Nain Rogue. While talking about Vijay, Napoleon said that he stopped talking with Vijay after they had a difference of opinion during the shooting of “Pokkiri”.

Veteran actor Napoleon who has acted in more than 150 films across South Indian film industry, also served as the Minister of State for Social Justice and Empowerment in Indian Prime Minister Manmohan Singh’s cabinet. When the host of the interaction asked Napoleon to share his opinion about the experience he had with Vijay during “Pokkiri” times, Napoleon said that he accepted to do the film only because of Prabhu Deva.

“Prabhu deva is a close friend to me. I accepted the film only because of him. He forced me to act in that role. I stopped talking with Vijay after we had a difference of opinion during the film. Since that incident, I stopped talking with him and stopped following his films as well. So I don’t know about his growth and what kind of films he is currently doing and all. As far as “Pokkiri” is concerned, he did a good job. He reprised the role that played by Mahesh babu. He is working hard, that’s why he came this far” said Napoleon in the interaction.

The difference of opinion Napoleon mentioned in this interaction was disclosed by movie journalists of “Valaipechu” youtube channel weeks ago. Without mentioning the other actor’s name Andhanan, one of the journalist explained the incident that took place years back, to his two and half followers. “Napoleon’s few of the friends from abroad are ardent fans of this particular actor it seems. Napoleon acted with that actor who has a huge market in Tamil film industry. He is one of four, five top actors of Kollywood. Napoleon accompanied his abroad friend to the shooting spot of the actor to help him capture a photo with the top actor.”