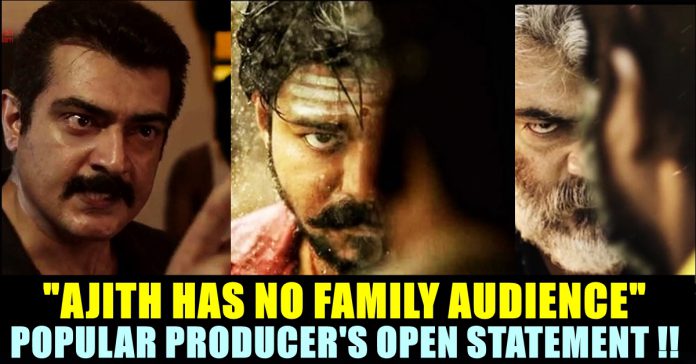 Tamil film Bigil starring Thalapathy Vijay has appeared to be a juggernaut at the box office, with its total collection touching Rs 200 crore in four days. Helmed by Atlee, Bigil has collected over Rs 85 crore in Tamil Nadu alone.

It’s the third collaboration of Atlee and Thalapathy Vijay. In the past, the duo had given hit films like Mersal and Theri. Theri was Vijay’s first film to touch Rs 150 crore. Mersal also pulled in nearly Rs 75 crore from overseas market and touched $10 million mark in lifetime earnings overseas. If Bigil touches Rs 300 crore in worldwide collection, it will be another record breaking achievement for Vijay.

“Thalapathy” Vijay and “Thala” Ajith are two of the most talented actors in the cinema industry of Tamilnadu. Its been a long time since actor Ajithkumar and Vijay declared as official rivals. Only on few occasions both these actors movies released together but on that day the opening of both the movies would be a deadly one.

Now in a recent interaction in Galatta youtube channel, producer Dhananjayan who is known for producing films such as Theiva Thirumagal, Ivan Vera madhiri, U turn, Kolaigaran has stated a opinion about the market value of Ajith and Vijay.

In the interview he revealed that Vijay has larger market value, compared with Ajith. He said that Vijay has attracted family audiences already whereas Ajith has started attracting them only since Viswasam. “After Rajinikanth, its only Vijay. As long as Rajinikanth works in movies, he will be the Superstar. After him, Vijay will automatically grab his place. Though Ajith has the mass value, his market didn’t expand as large as Vijay’s. Ajith’s reach among youth is wide but comparing to Vijay he has less family audience” said Dhananjayan in the interview.

Both the actors are praised for their respective skills and has separate fan base as we all know. Ajith who is known for his screen presence, has set the screen on fire while making his entry in his films. Meanwhile Actor Vijay known for his exceptional dancing skill.

What do you think on this statement made by Dhananjayan ?? Comment your views !!

Important Message From Yuvan To His Fans After Releasing “Pacha Elai” Song!!

After releasing "PachaEla" song from his upcoming movie "Love Today", renowned music composer Yuvan Shankar Raja came up with an important message to his...

Girl Struggled To Attend Online Class Without Smartphone !! Actress Sent Her An iPhone

After seeing a struggling story of a girl student who scored an impressive 94 percent in her pre university college exams in NDTV, actress...