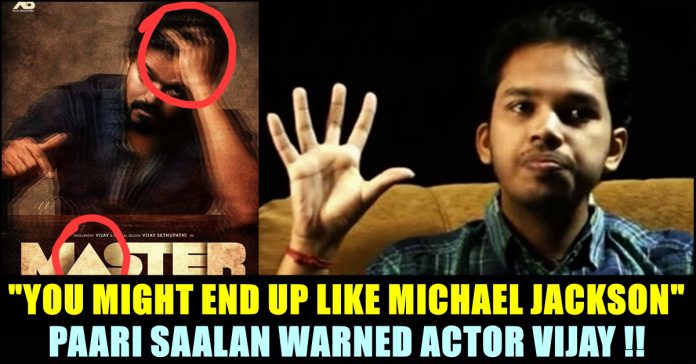 As memes and trolls suggested, Paari Saalan has come up with a facebook post to accuse Vijay’s upcoming movie “Master” and its makers. Paari Saalan is known for his appearance in Youtube platform. His controversial speeches attracted a wide attention and now he has came up with a post saying that “Master” first look has symbolisms of “Illuminati”.

“Illuminati” is a name given to several groups, both real and fictitious. Paari Saalan highly believes that Illuminati is the one that decides everything in the world, including Tamilnadu politics. In his recent facebook post, Paari said that Vijay must realize that he is in the hands of those who are trying to destroy Tamilnadu.

He said that the poster includes the symbolism of Devil’s horn and Masonic Pyramid. He further included that Vijay might end up like Michael Jackson if he continues to be in “their” grasp. Check out the screenshot of his post below :

“Devil Horn hand signature and Masonic Pyramid symbolisms. If some thing Ill happen to Tamil Nadu people these actors will also have a part in that.There is a plan to destroy Tamilnadu with fire. All those gas pipelines and projects like Methane extractions , and nuclear reactors .. any of these can cause a mass destruction through fire.Try to get out of their grasp Mr.vijay or you might end up like Michael Jackson.Many youngsters love you and they won’t continue to do so if they realise you are in the hands of those who plan on killing their families. Try to get out of their control.” read the post of Paari Saalan.

Earlier he accused Superstar Rajinikanth’s “Darbar” for having the symbolisms of “Illuminati”. These statements from Paari Saalan made an impact in social media as we can see the users of it reacting to it. Check out some of their reactions below :

Saw #PaariSaalan connecting #Dabar with Iluminati. Any ignorant person who watches his videos will be brainwashed for sure. His theatrical acts makes idiots to join his grp. However, this Seeman group definitely have a bigger agenda than we think. #Missionaries ? pic.twitter.com/hsWYLEOWa6

The most awaited first look poster of actor Vijay’s upcoming film released on 31st of December. The titled impressed the fans and followers of Tamil cinema as it broke the stereotypes of first look posters. Unlike other first look posters of actor Vijay, this one didn’t give any idea about the plot or genre of the film. The “blurred” effect was added in a way to tell the fans that it is going to be a director’s movie more than the actor’s. Vijay was seen facing the audience with his sharp and intense eyes.

What do you think on this statement of Paari Saalan ?? Comment your views below !!