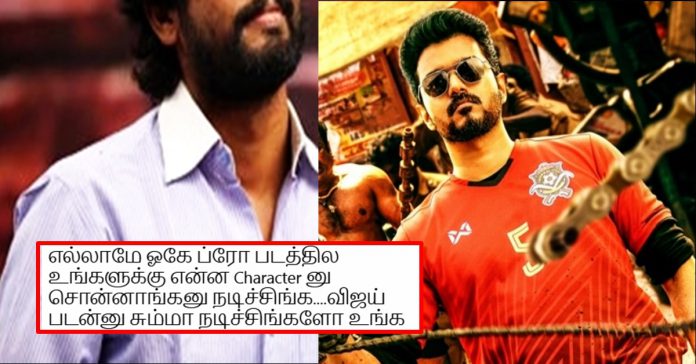 Apart from Vijay, Nayanthara and Jackie Sheroff, the film also had 11 girls as football players. Indhuja Ravichander, Amritha Iyer, Varsha Bollamma are few of them who grabbed the attention of the audience. Actor Soundara Rajan who is known for his appearance in films such as Jigarthanda, Sundhara Pandiyan also appeared in the movie. He appeared in a couple of scenes and came as Police officer in one of the scene.

The actor who started growing a special bonding with actor Vijay during the shooting period of Bigil, got appreciated by the actor in the audio launch of the movie. Vijay who observed Soundara Rajan on the sets of “Bigil” praised Soundhara Rajan’s intention of making his people proud.

Now Vijay has gifted his jersey T-shirt which he donned in the Bigil movie to the actor it seems. Sharing the special moment, Soundara rajan in his official twitter account said “This is the Jersy worn by our beloved @actorvijay anna in the movie & it was gifted to me by him. I am so emotionally bonded to it and this will remain my best ever gift in this year. Feeling so happy. Thanks a lot @Actor_Vijay 🙏🙏😍”

This is the Jersy worn by our beloved @actorvijay anna in the movie & it was gifted to me by him. I am so emotionally bonded to it and this will remain my best ever gift in this year. Feeling so happy. Thanks a lot @Actor_Vijay 🙏🙏😍🤗 pic.twitter.com/cRx8kwrgfI

However, few of the fans are not happy on the way Soundara Rajan was used in the film. Many of the people hardly witnessed him in the screen as he played a very small role, being a recognised actor. Check out some of the reactions he received for his post below :

The movie has already joined the 250 crores club and is marching towards 300 crores. The film reportedly collected 5 crores in UK alone. Music composed by A.R Rahman, the film was bankrolled by AGS Kalpathi with a budget around 180 crores.