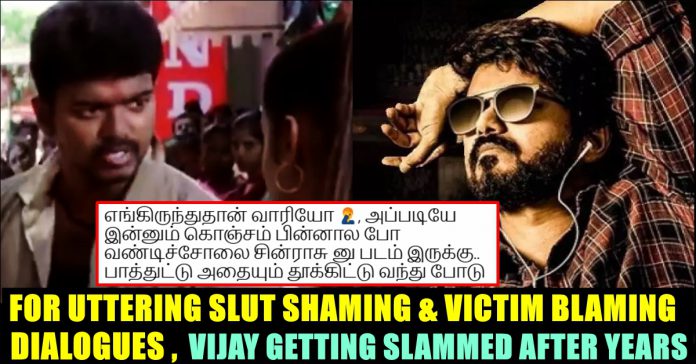 Vijay Getting Slammed By Netizens For This Old Film Of Him !!

Netizens calling out familiar personalities for the deeds they committed when there was no social media became common nowadays. Actor Vijay who is known for his huge fan base became the recent victim of such Internet troll. He was called by a set a twitter users for the misogynist dialogues he uttered in one of his films named as “Sivakasi” directed by Perarasu.

In the particular clip which is doing rounds in the micro blogging social media site, we can see the female lead for the way she was dressing. He who questions Asin for not wearing a saree, can be seen saying that all the men would wish to live with her if she wears a sleeveless and shorts, in a way normalizing sexual harassment against women. He who schools her on how to dress in public, would have completely forgotten about men who are causing the trouble in the first place. Ironically, the film became a block buster during its release time and gained the actor a mass appeal.

Despite of people slammed the actor for uttering the dialogue, many fans of the actor defended him as well. They said that most of the films which was released at that time had regressive dialogues and scenes. Some of them even accused that the author of the post is seeking publicity by using Vijay. Check out some of the mixed reactions below :

Break this furniture first then we'll come to that.. https://t.co/oH5Hf9F6a1 pic.twitter.com/S1WexIxlJW

THIS SHIT REEKS OF MISOGNY

Actor Vijay’s recent film “Bigil” talked about women empowerment and the actor almost avoided stalking in his film. The actor who did 60 plus movies has huge fan base and is one of highest paid actors in the country. Comment your views on this video and the reactions it is receiving.

In his concluding remarks, Justice Arumughaswamy who probed the circumstances leading to the death of former Tamil Nadu Chief Minister J Jayalalitha through his...

On Friday, an online user named Raman uploaded a video which showed a foreigner claiming himself as an ex colleague of the finance minister...