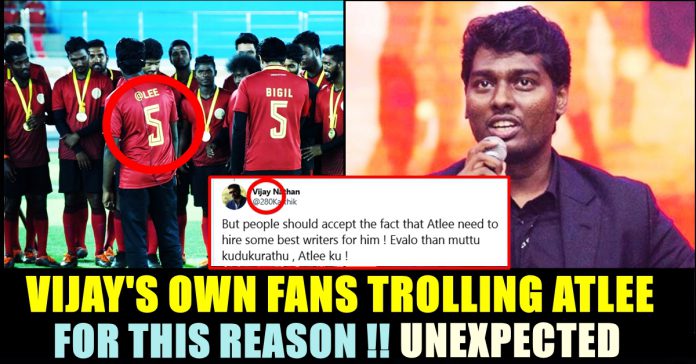 Director Atlee is a darling of actor Vijay fans till a video clip from Hollywood film Miracle surfaced in Internet. In the video clip, a Ice hockey team’s coach would shame his injured player to make him play in the rest of the game in order to win it. The film was directed by Gavin O Connor and the role of the coach was essayed by Kurt Russel who got highly praised by critics for his performance in the movie.

Fans of actor Vijay who witnessed this scene realized that the same scene got place in Bigil right before the climax. Being a film based on Sports, Action, Drama Bigil, directed by Atlee, revolves around a youngster who is an aspiring football player, diverts himself from his dream to take revenge of the murderers who killed his father. He then forms a women football team to achieve his father’s dream of providing an identity to his slum through excelling in football game.

Majority fans are believing that the scene where Vijay would pretend like scolding and body shaming his players to raise their concentration level in the game, was ripped off from Miracle which disappointed them. Watch the scene here :

Fans of the hero who defended the filmmaker during many plagiarism allegations, lost their belief after seeing this scene it seems. Many of them started trolling Atlee and posting memes against him to mock his audio launch speech where he said that this film will be his best writing film ever. (Also Read : This Strategy Used By Coach Michael Of BIGIL Was Also Copied ?? WATCH !!)

A twitter user whose handle name reads as Ragul Vjfan posted a thread to troll the director. The thread is a meme spoof of Sathuranga Vettai film in which he replaced Natti with Atlee. Check out the thread below :

Followed by this thread man fans of actor Vijay expressing their disappointment on the filmmaker who seems to do another film with the actor in future. Check out some of them below :

@iamsrk
bro,we have great respect on you nd love ur movies. now a days ur movies are so unique. U are giving ur best in all movie. My advice s pls avoid atlee movies. He s such a fraud, copying all movie scenes and make it one movie. Stealng movie scenes. Pls bwr of @Atlee_dir

But people should accept the fact that Atlee need to hire some best writers for him ! Evalo than muttu kudukurathu , Atlee ku !

Vijay fans dealing Atlee for the past few days 😂😂😂😂😂 pic.twitter.com/jsp8DXExRu

Director Atlee who is known for his collaboration with actor Vijay, is one of the highest paid directors in Kollywood. Being a former assistant of Shankar, Atlee’s way of presenting his films and the castings he choose for the characters are considered as his major qualities. All the four films of Atlee became blockbusters despite of the plagiarism controversies.

What do you think on these reactions ? Comment your views below !!

Actor Vijay who is fondly called as "Thalapathy" by his fans and followers has successfully completed 28 years in Tamil film industry. This achievement...

Veteran filmmaker and actor SA Chandrasekhar registered a political party with the Election commission of India earlier today. Moments after the filmmaker confirmed that...