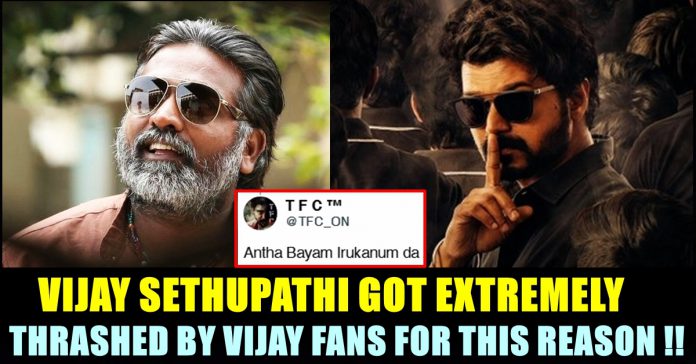 The second look of Vijay’s Master released yesterday and took the Internet by storm. It had the lead actor donning a black dress with cooler with finger in his lips in way of telling the students in front of him to keep quiet. In other perspective we can also assume that the actor is warning his enemies who are intended to cause trouble to the students who are standing around him. It also seems to be a graduation day as all the students were seen wearing black dress.

The makers who tentatively titled the film as #Thalapathy64, revealed the original title as “Master” on the last day of year 2019. Few months ago, the film commenced with a customary pooja in Chennai with Vijay, Vijay Sethupathi, Malavika Mohanan and Shanthanu Bhagyaraj and the rest of the crew in attendance. Directed by Lokesh Kanagaraj, the film is touted to be a gangster flick with Vijay Sethupathi playing the villain.

Many fans expected that the look of Vijay Sethupathi for the film Master will be released as the second poster. After seeing Vijay occupying the poster alone, few fans got disappointed. Meanwhile fans of actor Vijay expected Vijay Sethupathi to tweet the second look poster. After the poster got released, Makkal Selvan didn’t upload the poster for 3 long hours. This irked the fans of Vijay who started demanding the “Kavan” actor to upload the poster in a way of wishing.

However, the actor uploaded the poster in his twitter account on 7 : 45. As we all know, the poster was released on 5 PM. Check out his post here :

Though Vijay Sethupathi has admitted in several occasions that his social media accounts is being operated by an admin, Fans of actor Vijay trolled him for uploading the poster after three long hours.

What do you think on these reactions from the fans of actor Vijay ?? Comment your views below !!

Priyanka Chopra Dating Nick Jonas Who Is 10 Years Younger Than Her !! : Check Out How The Fans Thrashing The Duo !!

Priyanka Chopra and Nick Jonas' rumoured romance has been making headlines for a while now. After attending the wedding of Nick's cousin in New...