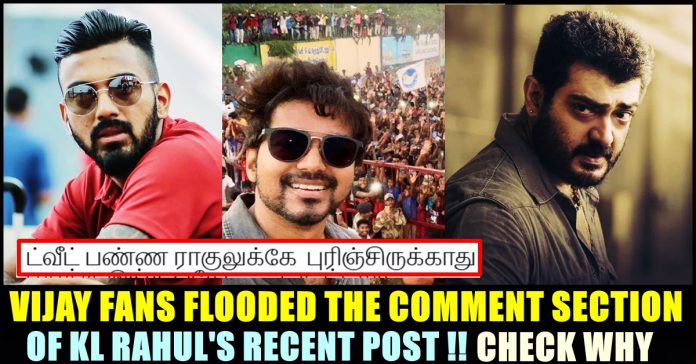 In a recent post uploaded by cricketer KL Rahul in Twitter, fans of actor Vijay flooded the comment section by referring actor Ajith to troll him and his fans. The main reason behind the act of the actor’s fans is the emoji added by the Indian cricketer. It is very well known that fans of actors Ajith and Vijay would use the reference of certain animals to troll each other. Ajith fans usually mention squirrel to troll the fans of actor Vijay whereas Vijay fans use “tortoise”.

Though it is not known why they are using the reference of the animals to troll each other, general fans got used to it. Now, KL Rahul, in his recent post, added a caption talking about being slow and steady. The young cricketer added an emoji of a “tortoise” to end his caption well. “Slow and steady” his caption read.

Ajith kumar who is considered as a rival of actor Vijay since mid 2000s, has a strong friendship with the “Gilli” actor since early 90s. They both acted together in a movie named as “Rajavin Parvayile” and their friendship became evident in certain occasions. Recently, in “Master” audio launch, Vijay said that he got inspired from his friend Ajith and wore suit for the first time for an event purpose.

Ajith who is known for his screen presence, impressed his fans with his off screen personality. Meanwhile Actor Vijay is known for his exceptional dancing skill and for his special ability of attracting kids effortlessly. However, online fans of both the actors have always interested in proving their favourite actor as the best comparing to the other. Their online argument turned ugly at times and now, in the comment section of KL Rahul, many fans of actor Vijay mentioned actor Ajith and his fans to troll.

Chief minister Edappadi K Pazhaniswamy and the Leader of opposition MK Stalin are actively involving in campaiging for their respective political parties in order...