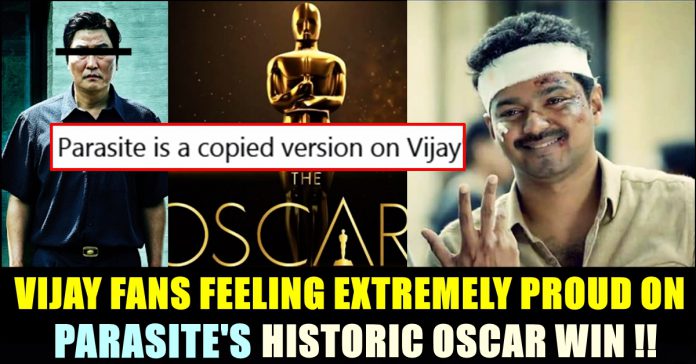 Vijay Fans Celebrating The Victory Of “Parasite” !! Check Why !!

The victory of “Parasite” at the 92nd Academy award ceremony is one of the biggest moment in the history of cinema. Parasite directed by Bong Joon Ho made the cinephiles from entire world to turn their head to its side. The movie which revolves around a four members family trying to own a luxurious house talked about the poverty in the South Korean region. Infact, the idea of the film is universal which can be connected by any one in the world.

The movie won the “Best Picture” award which is the toppest of all and became the first foreign language movie to win it in the history of Oscars. It also won awards under the categories of Best Director, Best Original Screenplay and Best International film.

What a historic moment!

'Parasite' shocks the world and takes home Best Picture at the #Oscars. pic.twitter.com/jO5OvTGzKX

The main themes of Parasite are class conflict and social inequality. Film critics and Bong Joon-ho himself have considered the film as a reflection of modern capitalism,and some have associated it with the term “Hell Joseon”, a phrase which has become popular, especially with young people, in the late 2010s to describe the difficulties of life in South Korea. The film also analyzes the use of “connections” to get ahead, especially for rich families.

Meanwhile, few of the fans Tamil cinema and Tamil actor Vijay are celebrating the film’s victory in the Oscars just because it features a concept similar to Tamil film “Minsara Kanna” directed by K.S Ravikumar. The similarity between the two films is the members of the poor family getting employed to a rich family without introducing themselves as a family. The Tamil film which was released in the year 1999 became a box office dud during its release time.

Now the above mentioned fans are proudly expressing their views on Oscar winning Parasite being similar to a film which was released in their region years ago. Check out some of their reactions below :

Parasite is a copied version on Vijay's Minsara Kanna

Watched #Parasite, sure it's a good movie. But screenplay (some sequences) has direct connection with #Tamil movie #MinsaraKanna starring #Thalapathy #Vijay.

People will say i am making this up – But #Parasite was inspired by our very own #Thalapathy's #Minsarakanna. Oscar nayakan #ThalapathyVijay . #OscarAwards

#Parasite won three #Oscars ..
And it's remake from our Thalapathy film #MinsaraKanna.

However, Minsara Kanna didn’t portray anything like social inequality or the pressure faced by the financially oppressed unlike Parasite which got acclaimed universally as it had the protagonist of it to intrude into a family with his family only for the sake of his love interest.

Comment your views on fans comparing Parasite with Minsara Kanna !!

Followed by the number of suicide cases by youngsters that has been reported in the state for the past few months, a report about...