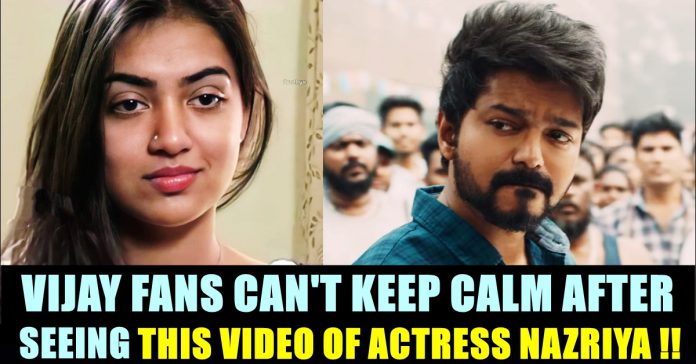 Even after the film completed its theatrical run, the craze created by the “Vaathi coming” of Vijay starring “Master” is still unwinding. Before getting released in theatres, “Vaathi Coming” released on youtube and left the fans humming. It was played as a wake up song for the contestants in the season four of Bigg Boss show. After release of the visuals, the song attracted millions and millions of fans along with celebrities from other notable industries.

Ashwin went one step ahead and made his teammates Hardik Pandya and Kuldeep Yadav to shake their legs for the song as well. “Vaathi should be happy!! 🤩🤩 with @hardikpandya93 @kuldeep_18” the cricketer wrote while releasing the video in his official Imstagram account.

Now, to our surprise, South Indian actress Nazriya who is known among Tamil audience for her films “Raja Raani”, “Neram” came up with a video dancing for “Vaathi coming” in a most cutest away. The actress who took a break from the film industry after marrying actor Fahad Fazil, made her come back through Anjali menon’s “Koode”. After that she appeared in a film named as “Trance” along with her husband.

Nowadays, the 26 year old actress is pretty much active in social media platforms and has been sharing about her daily routines to her 32 lakh followers. On Thursday, she uploaded a video of herself recreating the dance movements of actor Vijay in the opening song of “Master” and wrote “Cuz Vaathi is trending ……😆why not 😈” as her caption.

This video made the fans of actor Vijay extremely happy. They started sgaring the video in other social media platforms by heaping all praise for the “Om Shanthi Osanna” actress.

Look who is here with the #VaathiComing swag🔥😎#Nazriya dances in Vaathi Coming. I am waiting to see her with our beloved #ThalapathyVijay 😍😍@actorvijay #Master https://t.co/DKndgE1NpT

It is notable that the actress, in an award function, revealed that she is a die-hard fan of actor Ajith kumar and this gesture from her for the song of actor Vijay made the fans of both the actors happy. Nazriya is expected to be seen in a couple of Malayalam films shortly and the fans of Tamil film industry are eagerly waiting for her come back as well.