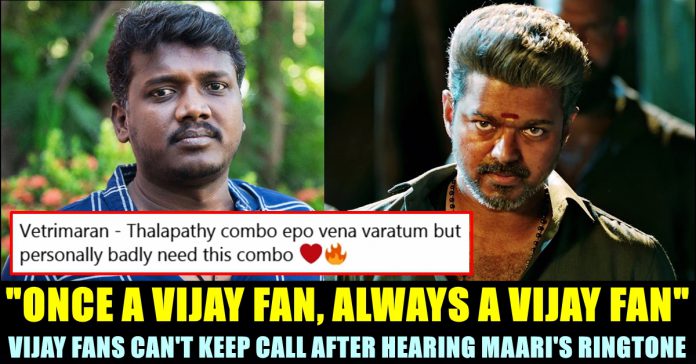 Days ago, a video of director Maari Selvaraj admitting that he was an ardent fan of actor Vijay prior directing went viral in social media platforms. Now, a video of the filmmaker delivering a speech during an event is going viral among the fans of actor Vijay. Ardent fans of the actor sharing the video and expressing their wish of Maari Selvaraj directing Vijay in future. The video caught the attention of the fans, not for the speech of the filmmaker, but for the ringtone of cell phone.

Director Maari Selvaraj who rose to fame among Tamil audience through his debut film “Pariyerum Perumaal”, is expected to create another magic through his upcoming film “Karnan” starring Dhanush. The emerging filmmaker who is expected to cause a revolution in Tamil cinema in near future, in an interaction with a youtube channel, has admitted that he is an ardent fan of actor Vijay once. He said that he only watched Rajinikanth and Vijay films at one period and explained how Director Ram, with whom he worked as an assistant director, influenced him to make impactful movies by making him read a lot.

Actor Vijay, known for his huge fan base, was last seen in “Master” directed by Lokesh Kanagaraj. The actor who debuted 27 years ago in the Tamil film industry, influenced an enormous number of youths and kids. Several fan clubs are being operated only to celebrate him. Most recent example for the power of his fan base is a selfie the actor captured in the shooting spot of “Master”.

Two years ago, during an interaction with youtuber Abishek raja, director Maari Selvaraj disclosed about his admiration towards the actor in a most strangest way. The 37 year old filmmaker said that he doesn’t know about anything when he reached Chennai and said that he is a leader of a fan club named “Adangaa Tamizhar Vijay Rasigar Mandram”.

Now, a recent video of the filmmaker providing his speech during the launch of Dhee & Arivu’s “Enjoy Enjaami” song surfaced in youtube. The video grabbed a special attention from the fans of actor Vijay, though the filmmaker didn’t mention “Master” actor anywhere. While interacting with the press, the “Karnan” maker’s cell phone rang and Vijay fans were very keen to notice the ringtone of him.

The director’s phone played the most popular “Master the Blaster” song from the recently released “Master” as his ringtone. The song featured in the film as the cell phone ringtone of JD played by Vijay. Sharing the video, a fan of actor Vijay wrote “Once a Vijay fan always a Vijay fan. @mari_selvaraj Sema bro Fanboy for life. @actorvijay. Do a movie with him Asap Thalaivaaa.”

Many other fans of “Thalapathy” exclaimed on seeing the video. In a two year old interview, Maari, to define his ignorance, said that he was an ardent fan of actor Vijay once. “To be frank, while reaching Chennai, I was a leader of “Adanga Tamizhar Vijay Rasigar Mandram”. I only watched Rajinikanth and Vijay films in theatres” Maari Selvaraj said during the interaction with VJ Abishek.

Check out some of the reactions for the ringtone of Maari :

Rajinikanth, the style icon of Indian cinema doesn't need any introduction to the people of Tamilnadu. Rajinikanth is the only actor in India to...