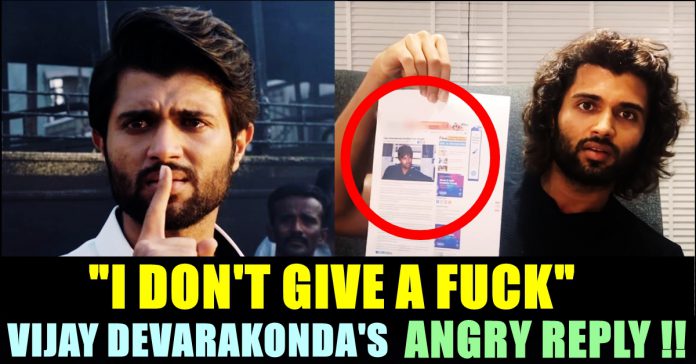 Vijay Devarakonda came up with a video clarification to reply to a fake news that surfaced in a website on 1st of May. Having just acted less than 10 movies, Vijay has a reach nationwide only because of the way he carries himself in his movies. The film “Arjun Reddy” gained him the fame he never expected. The film’s remake version which had Shahid Kapoor in the lead collected more than Rs.350 crores. With just few films to his credits, the 30 year old actor has became a darling of controversies already.

After the success of Arjun Reddy, Vijay went on to act in films like “NOTA”, “Dear Comrade”, “World Famous Lover” etc. As many cinema celebrities are coming forward to help the poor and needy in this Corona crisis, Vijay Devarakonda also announced that he will help people through “TDF” and “MCF”.

To help the people who are suffering in this lock down, Vijay Devarakonda made two big announcements which was lauded by the users of social media platforms and his fans. He said that he is planning to employ 1 lakh students post the crisis through “The Devarakonda Foundation” (TDF) which he calls as the “Future requirements”. As a solution to “Immediate requirements” Vijay said that he plans to spend Rs.25 lakh to 2000+ middle class families through his website. He said that he is willing to provide Rs.1000 worth home essentials to poor and needy who are applying in his website.

Now, a popular Telugu website accused the actor of insulting poor people with his confusing method of donating. The website said that Vijay Devarakonda failed to help 75,000 poor people by showing them Rs.1000 carrot who applied in his website seeking financial help. The website asked if Vijay is willing to help only 2,000 people why he have two states (Telangana, Andhra pradesh) build up rather than helping people within few areas within the city.

The website said that it requires Rs.8 crores to help the people who have applied but Vijay allotted only Rs.25 lakhs with Rs.50 Lakhs provided by his fans. It further accused Vijay and his crew for not doing the donation properly. It said that Vijay has donated just 2200 people with Rs.22 Lakhs and asked people to stop sending applications.

This news which grabbed the attention of the actor made him to release a video clarifying himself. “When someone who is supposed to be the guardian of truth lies to you or betrays your trust, intentionally-the society is in danger. This video is my responsibility to my people. Meanwhile. You are welcome to continue trying to end my career, destroy my image, write nonsense about me. Because I don’t give a F*ck” his post read.

In the video released by Vijay Devarakonda, the actor can be seen carrying the article published by the website and breaking it down sentence by sentence. He who denied all the allegations of the website asked the website to stick to what they are doing and stick to writing shit. While addressing their title “Vijay Devarakonda Insulting poor people” , he said that the website is earning money by using his name and his hard work. He showed the advertisements they kept in between his article.

Watch the video he posted below :

Comment your views on this video of the young actor !!

Previous articleTamil People Thronging In Andhra Border To Buy Liquor !! WATCH
Next articleSuriya’s Director In Big Trouble For His Tweet Against Women !!

A day after a couple lodged a police complaint alleging their one-month-old child had been kidnapped, the body of the child was found floating...

The International Cricket Council (ICC) on Sunday pointed out cricket legend Sachin Tendulkar's front foot no-ball, which he bowled during a net session at...