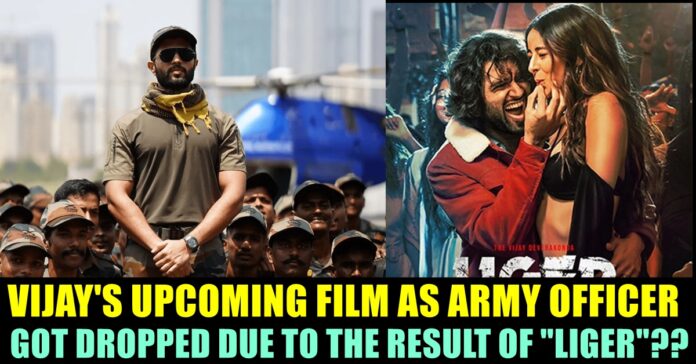 Followed by the failure of “Liger” at the box office, speculations surfaced saying that the upcoming film of the Vijay-Puri got shelved. Result provided by Liger of the same duo which released recently is the reason behind the speculations.

The film also failed to make an impact financially. “Liger” has VJD as an MMA fighter who goes on to win his matches. Known for his films that involves romance and violence, Vijay was expected to rock in the never seen before Avatar of him. Along with Vijay Devarakonda, the film starred Ananya Pandey, former boxing champion Mike Tyson and others. The film wa directed by Puri Jagannath of “Pokkiri” and “Temper” fame. Renowned Bollywood filmmaker Karan Johar is one of the producers for the movie.

Due to the result provided by “Liger”, strong speculations on “Jana Gana Mana” getting dropped did rounds in social media platforms. “Jana Gana Mana” is expected to be a fictional movie with action scenes akin to those in URI and other movies of a same nature. The movie is going to feature Vijay devarakonda as an army officer and Pooja Hegde as lead actress. Puri jagannath, Charmme kaur and Vamshi Paidipally will be bank rolling the film.

Now, reacting to the speculations, producer Charmme kaur came up with a tweet writing “Rumours rumours rumours! All rumours are fake! Just focusing on the progress of 𝐏𝐂 .. Meanwhile, RIP rumours !!”

Days ago, Charmme posted a tweet saying that the filmmaker is going to take a break from social media.  “Chill guys! Just taking a break (from social media) @PuriConnects will bounce back 😊 Bigger and Better… until then, Live and let Live ❤️” her tweet read.

Chill guys!
Just taking a break
( from social media )@PuriConnects will bounce back 😊
Bigger and Better…
until then,
Live and let Live ❤️

Previous articleVIRAL VIDEO : Man Arrested For Using National Flag To Clean His Scooter !!
Next articleBJP Mocked Rahul Gandhi Over His Rs. 41,000 Shirt !! Check Out The Reply Of Congress !!