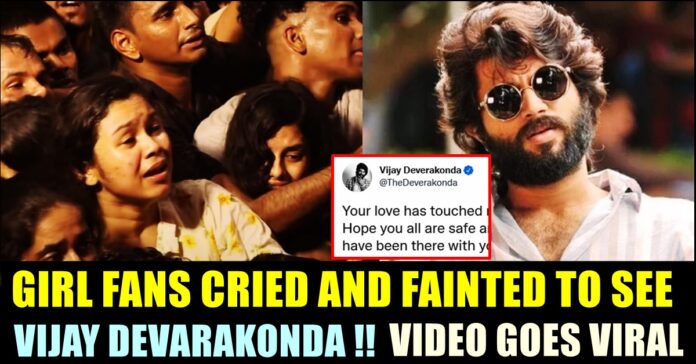 Video of actor Vijay Devarakonda getting emotional after knowing that his girl fans got suffocated after attending a promotional event of his upcoming film “Liger” is going viral in social media platforms. After cancelling the event, the actor also uploaded a tweet in his official twitter handle expressing his love towards his fans.

As a part of the film’s promotion, Vijay Devarakonda and Ananya Panday had gone to a shopping mall in Navi Mumbai and were forced to leave the event in midway. To witness the actor, a large crowd gathered at the venue and led to a stampede-like situation.

A viral video shows people thronging to see the actor in person and shoving each other without being able to stand still. They were seen pushing through the barricades to get closer to the actors at the centre stage. A girl fan of the actor got almost fainted after feeling suffocation. The actor and actress who were supposed to take part in a special activity at the mall, left the mall after being asked to do so.

“The moment Vijay took to the stage, there were sounds of swooning all around. The organizers and volunteers were shocked to see that a few female fans fainted and a few other girls started crying. Loads of fans had posters and sketches of Vijay and then the chants of “Vijay we love you” started” a source said according to reports. The actor, immediately reacted to the calamity by asking them to be stay safe.

Later the evening, Vijay Devarakonda came up with a tweet addressing the issue. In his tweet, Vijay said that the love of the fans has touched him and hoped them to safely reach home. The “Arjun Reddy” actor also said that he is thining about all his fans while ging to bed.

“Your love has touched me ❤️ Hope you all are safe and back home. Wish I could have been there with you all so much longer. Thinking about you all as I go to bed. Goodnight Mumbai 🤗❤️” read the tweet of the Telugu based actor.

Your love has touched me ❤️
Hope you all are safe and back home. Wish I could have been there with you all so much longer.

Thinking about you all as I go to bed.
Goodnight Mumbai 🤗❤️#Liger

Previous articleVerbal Spat Between The Online Fans Of Suriya & SK !!
Next articleNorth Indian Employee Got Arrested For Harassing A IIT Student !!

One more death occurRed in Tamil nadu due to the entrance examination that is being conducted to get medical seat. A student named Murali...