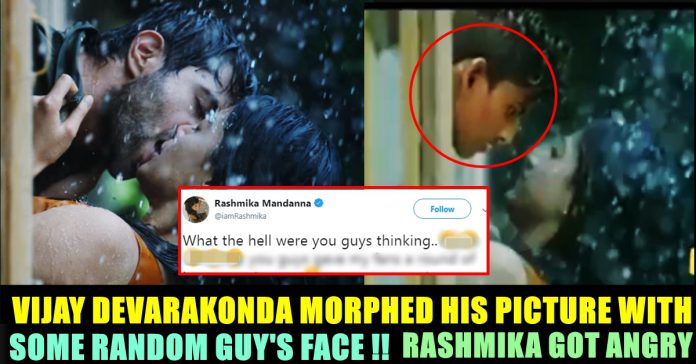 Vijay Devarakonda and Rashmika Mandanna are teaming up for the second time for their upcoming film Dear Comrade. After Geetha Govindam, the two are back again and fans of the stars can’t wait to catch their sizzling chemistry on the big screen. Also, popular Kannada actress Rashmika Mandanna celebrates her birthday today.

Twitterati has been showering love and birthday wishes on the gorgeous Southern beauty. However, one of the special wishes has come from none other than her upcoming film’s co-star Vijay Deverakonda. Vijay’s birthday wish for Rashmika has taken the social media by storm. Vijay decided to have some fun by announcing that he’s going to release something really special as her birthday surprise. On her birthday the actor uploaded a troll video some random guys in the teaser of Dear Comrade.

However, much to Rashmika’s shock, all that she could see in her so-called birthday special was a troll video. But obviously she lost her calm and tweeted to Vijay saying, “What the hell were you guys thinking.. you guys gave my fans a round of heart attack man..Jesus.. @bharatkamma comrade… @MythriOfficial I can’t believe you guys agreed to this..”

What the hell were you guys thinking..😂😂😂😂😂 you guys gave my fans a round of heart attack man..😂Jesus.. @bharatkamma comrade… @MythriOfficial I can’t believe you guys agreed to this..😂😂 https://t.co/jbhrKAdpap

Admitting that it was a all a prank, Vijay then shared a heart-felt note for Rashmika and promised to release her song from Dear Comrade on April 8.

We were just kidding, don’t be upset with us. You are the joy of our set, you make us tear up with your performance and smile through the day.

This 8th at 11.11 AM, we dedicate the First Song to you, this is how you make us all feel. #HappyBirthdayDearLilly pic.twitter.com/zF13DJeQrT

Check Rashmika’s reactions for this :

Directed by Bharat Kamma, Dear Comrade is all set for a grand release worldwide on May 31, 2019, in all South Indian languages. Rashmika Mandanna, who turned into an overnight star, is now making her debut in Tamil. The film, directed by Bhagyaraj Kanna, will feature Karthi as the male lead. The actor’s 19th film will join the ranks of movies having multilingual releases. Rashmika was apparently roped in because of her success in Telugu films. On the other hand Vijay Devarakonda lready made his debut in Tamil films through his film NOTA.

Talking about Rashmika’s personal life, the actress got engaged to Rakshit Shetty in 2017; however, much to everyone’s surprise, the couple parted ways in 2018.

Dhiwaharan - September 24, 2021
0
Murder accused Abhirami who is popularly known as "Tik Tok" Abhirami became the cause of the death of her brother who got...