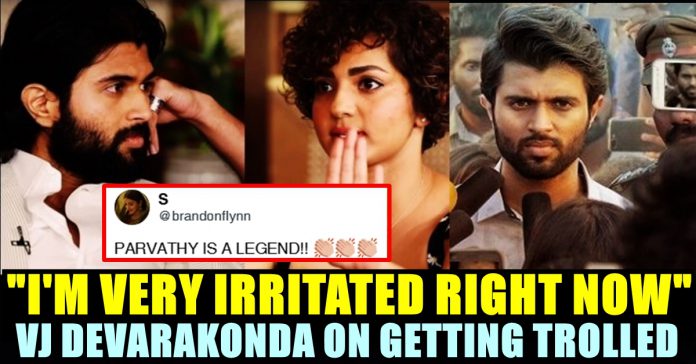 The interaction between emerging actors across the country for Film companion is making headlines since it got surfaced in the youtube channel of the same. The interview had Bollywood stars Ayushmann Khurrana, Alia Bhatt, Deepika Padukone, Ranveer Singh, Manoj Bajpai posing along with South cinema’s Vijay Sethupathi, Arjun Reddy star Vijay Deverakonda and Malayalam actor Parvathy Thiruvothu.

Actress Parvathi who is known among Tamil audience for her performances in films like Poo, Mariyaan opened on why she chose not to act in films that has item songs or misogyny perspective. Parvathi clearly said that there is a fine line between showing what misogyny is in society and glorifying it. The actress further compared Joker and Arjun Reddy to make her point clear about glorification and simply portraying. Joker is a recently released hollywood film in which the titular role was essayed by Joaquin Phoenix.

“Arjun Reddy or Kabir Singh had the visual grammar of glorification but Joker didn’t. In Joker when we see the character killing everyone we are not getting influenced. The film literally showed us the facts and we can leave it where it is after watching it. But Arjun Reddy influenced many and we can see it in the internet” said Parvathi who labelled Arjun Reddy as a misogynist movie in front of the one who played the lead role in it. The actress even added that actors should be responsible by not being the part of such movies. This bold statement of the actress lauded by netizens as she talked what many of them felt.

“I am normally very understanding. I give people the benefit of doubt. I saw that there was a genuine angst and genuine intention behind these questions. But these people don’t know what they are talking about. I feel they are very misplaced. I didn’t mind the question. I love Parvathy. I admire her work. What irritates me is the social media and media ‘hadavidi’. People go nuts. They don’t know what they are talking about. I dislike that people are celebrating at my cost. That’s my issue. I don’t care what you think of the film, misogyny or the interview.” said Vijay Devarakonda in the film fest.

“I am very irritated right now. I can’t keep it in and I want to take it out. If I will keep it in, it will become a tumour inside me,” he said.

What do you think on this speech of Vijay ?? Comment your views below !!

Previous articleLyricist Vivek Trolls Himself For Chumma Kizhi Lyric Video !!
Next articleNot Nayanthara Or Keerthy Suresh But This Yester Year Actress To Play Lead In Thalaivar 168 !!

‘Education for all’ is one of the major tasks being carried out by the Indian government but still we have the lowest female literacy...

Actor Ravichandran who rose to fame among television audience through his stint in widely watched "Pandiyan Stores" serial of Vijay Television, in his recent...