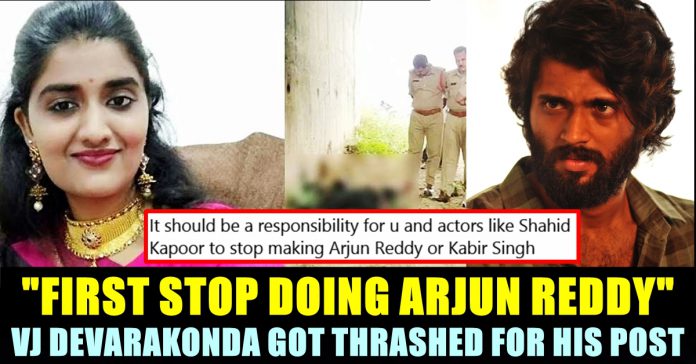 Vijay Devarakonda recently caught in controversy while arguing about his recent blockbuster film Arjun Reddy with actress Parvathy. Now today the actor posted an emotional message regarding the murder of Priyanka Reddy to make his followers aware of the bad situations that they could possibly face in the future.

“I have had to stay on the phone while a member of the family or friend felt unsafe. It’s one of the scariest situations to be in. We all need to take responsibility for the boys/men in our homes, our friends, and our surroundings. Stand up to any wrong behaviour, correct them, make them understand. And those who don’t behave like humans don’t deserve human rights. Give them what they deserve. Please spread this message far and wide. Our lives are the most important. Don’t hesitate to call the cops at 100/112 for any help.” he wrote in his post.

This tweet from Vijay surfaced after the tragic murder of Priyanka Reddy. A twenty six year old doctor Priyanka, who went missing since wednesday found dead at Shadnagar. This news indeed shook the entire country as many citizens raised voice against the culprits. The veterinarian doctor suspected to have been raped and murdered by four people including a lorry driver and cleaner. The news of the incident happened in Hyderabad is spreading like wildfire across the country.

Family members of the victim allegedly informed that Priyanka called them the last night around 9:30 PM and said that her bike tyre was punctured and locals offered her help. They allegedly took her bike by saying that they will get it repaired and never returned. When Priyanka called her home and informed about it, her sister, Bhavya reddy suggested her to move into a more crowded area like toll booth to be safe. When the family contacted her again, her phone was switched off and the worried family went to place mentioned by Priyanka but couldn’t find her which made them to file a complaint in local police station immediately, around 11 in the night.

The next morning Priyanka’s body was charred beyond recognition in a devastated way and the family abled to identify Priyanka only through the Ganesh locket she was wearing. The body was sent to post mortem and the investigation is underway.

Though Vijay posted the tweet in an intention to create awareness, followers of him started criticizing the actor for the movies he chooses to act. They somehow thought that the films Arjun reddy and Dear Comrade are instigating the youngsters to get inspired from the lead character who is a flawed man. Check out some of their comments here :

Most of the youth fallowing you but you are doing #arjunreddy #Dearcomrade movies with gang War.

Dear Vijay, it's high time that you realize that women's vulnerability is a serious issue. It's not that your one or two movies can change how people behave ,but it's cumulative,it adds up slowly into the psyche . As an responsible human being you don't have to be a part of this.

Or you could just reflect the same in your films. Ohh wait that's out of your responsibility.

What do you think on these comments received by Vijay !?/ comment your views !!

Previous articleThousands Of Graduates Applied For Sweepers Job In Tamilnadu !!
Next articleSachin Tendulkar Got Irritated On Seeing The Fake Accounts Of Sara & Arjun Tendulkar !!

Ganesh Venkatraman is an Indian actor who has acted in six different Indian regional film industries. He debuted to Tamil through Radha Mohan's Abhiyum...

"Maveeran" producer Arun Vishwanath replied to the allegations made by the youtubers of "Valai Pechu" channel. The producer tagged the three movie journalists Shakthi,...