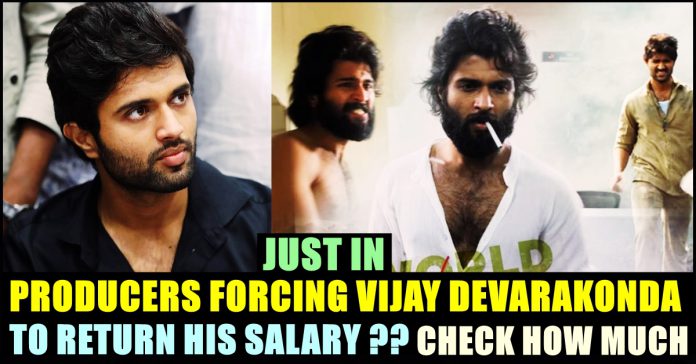 Actor Vijay Devarakonda is being forced by distributors and producers of his latest film “World Famous Lover” to return a part of his remuneration as the film became a box office bomb, according to reports. Vijay Devarakonda promoted his film “World Famous Lover” by appearing in several interviews and events. In the film he paired with 4 top heroines of South Indian film industry. The actor who is slowly becoming a darling of controversies, is now being forced by the distributors to return a part from his 10 crores of money which he received as salary to act in “World Famous Lover”.

Vijay Devarakonda is an South Indian actor who rose to fame through a Telugu film named as “Arjun Reddy”. The film became a blockbuster not only in Andhra but the people of Tamilnadu and Kerala also celebrated the movie and it impressed the youths of the states in big time.

Coming back to the controversy of “World famous Lover”, the film received mostly negative reviews and became a dud at the box office on the 4th day since its release. It became a complete washout on the fourth day, according to sources. The distributors approached the Telangana film chamber of commerce and filed a case as they suffered huge losses. It has been reported that the actor is completely unavailable even after the buyers made efforts to reach him. Members of the chamber decided to inform director Puri Jagannath about the situation. The filmmaker is going to direct Vijay’s upcoming film “Fighter” and the members have made it clear that his film will be banned and there will be no buyers for it if Vijay fails to respond. It is believed that Puri alerted Vijay and the actor is expected to reach Hyderabad to solve the issue.

The film’s theatrical rights were sold for 23 crores to Telugu states Andhra Pradesh and Telangana and the film managed to earn a share of Rs. 8.15 crores. Distributors of the movie have incurred a loss of Rs.14 plus crores and demanded a compensation from the makers of it. They have demanded for a refund of about 20% from Non-refundable advance.

The reports suggests that the producers of “World Famous Lover” are ready to compensate the loss of the distributors only if Vijay Devarakonda accepts to return a part of his salary. They asked their hero to share the burden in compensating the loss by demanding a part in his salary of Rs. 10 crores.

Vijay Devarakonda is indeed facing severe criticism from the audience of cinema for appearing in the same kind of career since his blockbuster movie “Arjun Reddy”. Playing the character of an emotional lover became Vijay’s trademark which is evident through his films such as Geetha Govindham, Dear Comrade, World famous lover and Arjun Reddy. As a effect of this, Vijay announced that “World famous Lover” is going to be his final romantic film in his career. (Also Read : Unexpected Message From Vijay Devarakonda For His Fans !!)

Previous articleRio Posted A Comparison Meme Of Himself With Sivakarthikeyan !!
Next articleActor & Director Replied To Fan Regarding “MASTER” Update !!