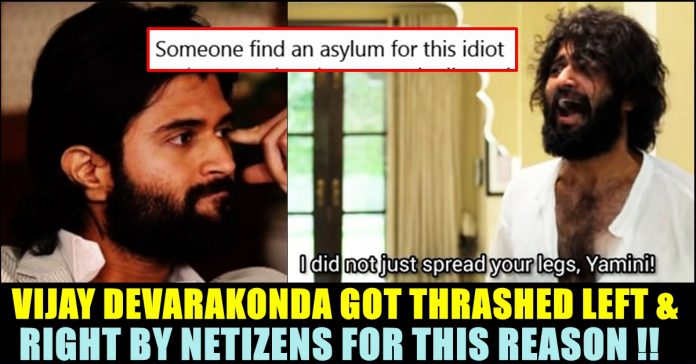 “Kabir Singh” was directed by Sandeep Vanga, the one who directed “Arjun Reddy” and has Shahid Kapoor in the lead role. Vijay Devarakonda, then appeared in “Dear Comrade” which has Rashmika Mandanna in the female lead role. Now the teaser of his next film “World Famous Lover” has released.

Directed by Kranthi Madhav, the film features Vijay Deverakonda, Aishwarya Rajesh, Raashi Khanna, Izabelle Leite and Catherine Tresa in the lead roles. The film which has been in the making for about a year is currently in the post-production stage. On January 3, the makers unveiled the film’s teaser amid huge expectation. The one-minute-long teaser is full of emotion ranging from love, heartbreaks and sadness. We also see glimpses of Vijay Deverakonda displaying his rage.

Though the teaser reached 6 million views in no time, many of the netizens got disappointed with the teaser it seems. Many started trolling the actor for appearing in the same kind of genre. Check out some of their reactions below :

I for sometimes think this guy only changes the title of the movie and releases the same movie over and over again 😂 #WorldFamousLover https://t.co/NriRGj8GaB

What do you think on these reactions received by Vijay Devarakonda?? Comment your views !!

These Romantic Dubsmashes With Others Of Killer Abirami Trending Now & Its SHOCKING !!