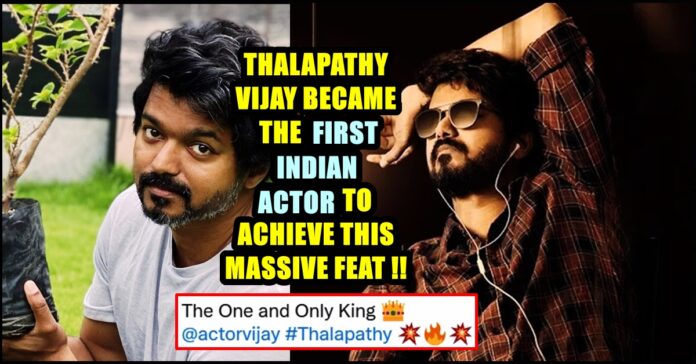 Tamil actor Vijay became the first Indian actor to garner 500k likes for a tweet he posted from his official twitter handle. A post he uploaded during August 2020, accepting the challenge of Telugu Super star Mahesh Babu, has received 500 k plus likes from the users of the micro blogging social media site. As soon as the actor achieved the feat, his fans couldn’t keep calm as a result of which “Half Million Likes For Vijay” hashtag is trending.

Known for predominantly appearing in Tamil films, Vijay was last seen in “Master” directed by Lokesh Kanagaraj. The actor who debuted 27 years ago in the Tamil film industry, influenced enormous number of youths and kids through his onscreen presence. Several fan clubs are being operated across the state only to celebrate him. Most recent instance for the power of his fan base is a selfie the actor captured in the shooting spot of “Master”.

The actor who is currently busy shooting for his upcoming film “Beast”, signed his first direct Telugu film as well. Now, being one of the highest paid actors of India, Vijay became the first Indian actor to get 500k likes for one of the tweets he posted. On 9th of August 2020, on his birthday, Telugu actor Mahesh Babu came up with a video in his official twitter handle in which he was seen planting a tree.

He tagged actor Vijay, Junior NTR and Shruti Haasan and challenged them to do the same. Check out his tweet below :

There couldn’t be a better way to celebrate my birthday💚 #GreenIndiaChallenge
I pass this on to @tarak9999, @actorvijay & @shrutihaasan. Let the chain continue and transcend boundaries😊 I request all of you to support the cause. One step towards a greener world! pic.twitter.com/MGDUf9B4xu

Accepting the challenge, Vijay uploaded a series of pictures of himself planting trees and wrote “This is for you Maesh babu garu. Here’s to a Greener India and Good health. Thank you #StaySafe” in his tweet which was uploaded on 11th of August 2020.

This is for you @urstrulyMahesh garu. Here’s to a Greener India and Good health. Thank you #StaySafe pic.twitter.com/1mRYknFDwA

This tweet of Vijay garnered 500k likes on Friday which left fans of the actor to go gaga over it. “Half million likes for Vijay” trending in the micro blogging social media site with fans naming Vijay as the first Indian actor to achieve the feat.

First ever indian actor to achieve this milestone 🤩🔥 500k likes 🤙😍

After getting evicted from Bigg Boss show, Vel Murugan met media and started sharing about his experience with his housemates in Bigg Boss house....