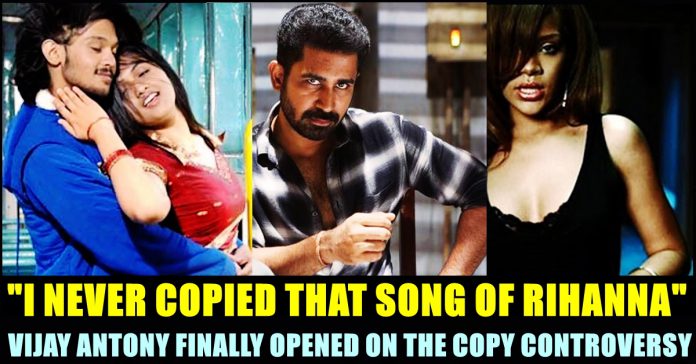 Music director cum actor Vijay Antony, in an interview, opened about the controversial accusation that was made against him. He who debuted as a music composer through a film named “Sukran”, composed music for Nakkhul’s debut film “Kaadhalil Vizhunthen” and the songs of the film became chartbusters. However, the musician got accused of utterly copying Rihanna’s “Unfaithful” while composing music for “Unakena Naaan” song in the film. In an interaction with a youtube channel, Vijay made it clear that he didn’t compose music for that particular song in the film but singing that song was the only mistake he made. He went on to say that he never copied any song in his entire career.

“In the “Kaadhalil Vizhunthen” film, all the songs “Thozhiyaa En Kaadhaliyaa”, “Solladee”, “Unakena Naan”, “Naaku Mukka” became huge hit. For “Unakena Naan” song, I composed like 15 songs to convince the director. But the director kept a song in his mind and wanted it to take place in that particular situation. He said that the song is going to decide his life and didn’t get satisfied with the songs I composed” Vijay Antony said in the interaction.

“At last, he showed me a song and asked me to reuse it. I said that I couldn’t do it officially as I am a music director. He said that he will put his name in the credits for that particular song and went ahead to use it in his film. As I am not going to be the music director for that song legally, I asked him to do whatever he wants. In the album, you should use the name of your music director and I won’t do it” said Vijay Antony and went on to share about the only mistake he committed.

Here’s the vidoe of the original version of the same song :

“I should have left it there to them. That’s where I made a mistake. As we couldn’t get a proper singer for that high pitch song, I happened to sing that song myself. For that song, my name would appear in the credits as a singer. Even if you check it today, credits of “Unakena Naan” song will be under the name P.V Prasad and I can proudly say that I never copied music in my entire career” he film conposer added.

Vijay Antony who was last seen in “Kodiyil Oruvan” as a protagonist, is expected to be seen in films such as “Tamizharasad”, “Agni Siragugal”, “Khaki” and “Pichaikaaran 2”. “Thimuru Pudichavan” is the last fil Vijay Antony composed music for. He who is also producing films through his banner, editing his own films nowadays. Comment your views on this statement made by him !!

In a way of responding to the notorious hashtag #DhoniRetires, Sakshi dhoni, wife of the former Indian captain came up with a response to...