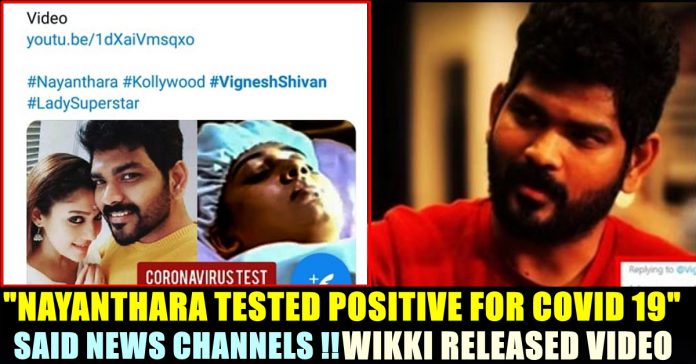 Several reports from various news portals emerged on Sunday alleging that the star couple of Kollywood Vignesh Shivan and Nayanthara tested positive for the deadly virus COVID 19 which killed more than 4 lakh people across the world. The filmmaker who is very much active in social media platforms, came up with a video denying all the rumours in style.

People are very much bored due to the lockdown implemented by our Indian government which is lasting more than 90 days as of now. They are involving themselves in several activities and trying to kill boredom in various ways. Meanwhile, small time media portals are busy spreading rumours and speculations about popular cinema celebrities to keep their followers engaged. On Sunday, enormous number of media portals updated that the couple who are currently involved in live-in relationship got infected by the virus. They even dragged filmmaker Mysskin and said that he also resulted positive.

Check out some of false updates that emerged on Sunday :

The frustrated filmmaker who enjoys 20 lakh plus followers in Twitter and Instagram, came up with a video completely denying these fake updates. Vignesh Shivan posted a video of himself and Nayanthara giving funny facial expressions with a snapchat filter on for a happy background music and said that it is their reactions for all the news that emerged regarding them.

The “Naanum Rowdy Thaan” maker further said that God blessed them with enough strength and happiness to see the all the jokes from the jokers. “And .., that’s how we see the news about us, the corona and the imagination of all the press & social media sweethearts 🥳Anyways! To our well-wishers 😇 We are happy 😊 healthy and God has blessed us with enough strength & happiness to see all you jokers and your jokes ! 😇😇😇 God bless 😇😇😇 “ the caption of his post read.

And .., that’s how we see the news about us, the corona and the imagination of all the press & social media sweethearts 🥳 Anyways! To our well-wishers 😇 We are happy 😊 healthy and God has blessed us with enough strength & happiness to see all you jokers and your jokes ! 😇😇😇 God bless 😇😇😇🧚‍♂️🧚‍♂️🧚‍♂️🧚‍♂️

This reply from Vignesh getting wide reach with hilarious reactions from online users who are trolling the media houses for spreading such kind of a baseless rumour. Vignesh Shivan debuted to Tamil film industry through Simbu’s “Podaa Podee”. The filmmaker developed a romantic relationship with Nayanthara during the making of his second film “Naanum Rowdy Dhaan”. After the success of Naanum Rowdy Dhaan, Vignesh Shivan directed actor Suriya in “Thaana Serntha Kootam”. He also started a production house with Nayanthara and named it as “Rowdy Pictures” with which he is currently producing “Nettri Kann” by having Nayanthara in the lead role. The filmmaker is also going to direct a movie named as “Kaathu Vaakula Rendu Kaadhal” by having Nayanthara, Vijay Sethupathi and Samantha in the lead roles.

Earlier, in a post, Vignesh confirmed that he going to marry Nayanthara by saying that she is going to be the mother of his future child through an Instagram post.

Hospital That Gave Birth To Nayanthara’s Babies Is In Trouble!!

Tamilnadu government officially released a press note clarifying about the details on the investigation that was conducted on how celebrity couple Nayanthara and Vignesh...