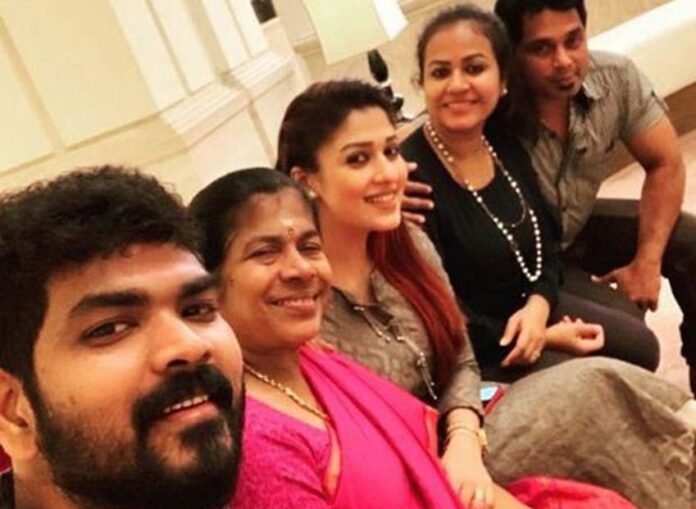 Director Vignesh Shivan’s mother Meena Kumari lauded her daughter-in-law, actress Nayanthara for her kind heart and sweet gestures towards her maids. She said Nayanthara gave Rs. 4 lakh to one of her maids who was suffering from debts and having such heart of giving is rare. Meena Kumari was a police officer by profession and the video was captured during a meeting.

“Totally 8 members are working in my daughter-in-law’s house. That includes 4 males and 4 females for works such as cleaning, cooking, ironing and other works. One of the maids looked sad and Nayanthara asked her what’s her problem is. That woman said that she has Rs. 4 lakh debt and Nayanthara gave that amount to her immediately” Meena kumari said in the video.

“She was able to provide the money as she is a leading actress but one must have such heart to give money” She further said. “That maid worked hard in that house for 2-3 years. Nayanthara’s mother came from Kerala and gave two golden bangles for that maid”

“Cameras were installed inside house. That woman won’t even drink a coffee or milk without getting Nayanthara’s permission. They would eat only if they were given permission. Nayanthara also gives them (maids) boxes of food” Wikki’s mother further said.

“Only if maids gain the trust, owners will do what is required. I got my maid married by giving her 5 sovereigns of gold. I even got her husband a job and solved their problems as much as I can” she added.

Vignesh Shivan and Nayanthara got married on 9th of July and went to Thailand for their honeymoon. The filmmaker, actress duo fell in love during the making of their first film “Naanum Rowdy Thaan”. Since then, the couple were involved in a live-in relationship for 7 long years and successfully got married in a grand manner at a resort in Mahabalipuram. Superstar Rajinikanth, Bollywood Badshah Shah Rukh Khan, Suriya, Vijay Sethupathi, Anirudh are some of the important personalities who attended the marriage event of the Kollywood’s most favourite couple.

On 9th of July, the duo gave birth to twin babies and became proud parents. After becoming wife and mother, Nayanthara celebrated her 38th birthday on 18th of November.

Recently, teaser of Nayanthara’s upcoming film “Connect” directed by Ashwin Saravanan got released. First look of her 81st project directed by Durai Senthilkumar also got released. Both the projects are being bankrolled by Rowdy Pictures, a production house owned by the “Naanum Rowdy Thaan” couple. “Jawaan”, “Gold” are some of the other projects that are awaiting for the release.

Mani kandan of "Jai bhim", "Vikram Vedha" fame opened on the emotional speech of "Cooku with Comali" Ashwin in the audio launch of his...