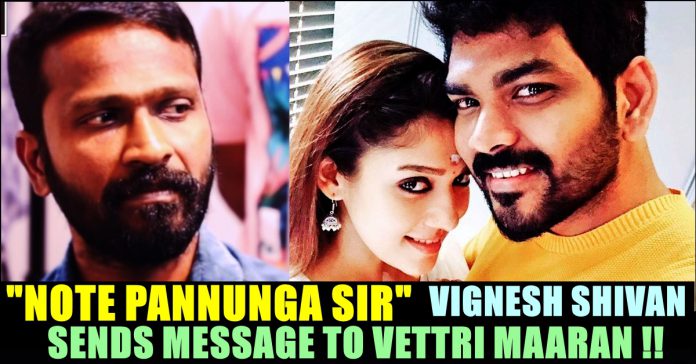 Parasite directed by Bong Joon Ho made the cinephiles from entire world to turn their head to its side. The movie which revolves around a four members family trying to own a luxurious house talked about the poverty in the South Korean region. Infact, the idea of the film is universal which can be connected by any one in the world.

The film Parasite has re-written the history by getting nominated for 6 academy award nominations. The critically acclaimed film has become the first ever South Korean movie to get nominated in academy award after 91 years. The film has been nominated under Best Picture, Best Director, Best Editing, Best Production design, Best Original Screenplay and Best International feature film.

While the film buffs of the entire world are praising the movie, Tamil director Vignesh Shivan didn’t miss to address the achievement in his official twitter account. The filmmaker awed by the fact that any movie in the world can get recognised by the juries of academy award.

While praising the film, Vignesh Shivan also tagged Vettri Maaran’s official twitter account and asked him to note. Vettri Maaran is known for his plots with universal appeal. His movies such as Aadukalam and Asuran had the essence to become world movies. Vignesh Shivan, in his tweet wrote, “Inspiring to see #Parasite – the MasterPiece from #BongJoonHo – a socio-political thriller on class warfare getting this much acknowledgement from @TheAcademy 👏🏻 Gives the Hope that any film from any part of the world can become an OscarWinner ! @VetriMaaran note pannunga sir😇”

Inspiring to see #Parasite – the MasterPiece from #BongJoonHo – a socio-political thriller on class warfare getting this much acknowledgement from @TheAcademy 👏🏻
Gives the Hope that any film from any part of the world can become an OscarWinner ! @VetriMaaran note pannunga sir😇 pic.twitter.com/UPMoBRXI5k

On the work front, Vettri Maaran is making a movie for RS infotainment by having actor Soori in the lead. He is also committed to make a movie with actor Surya under Kalaipuli S Dhaanu’s V creations. The film is titled as “Vaadi Vaasal”. Vettri Maaran and Vignesh Shivan has directed each segments in an upcoming anthology web series.

Meanwhile Vignesh Shivan has prepared a script which was tentatively titled as SK17. The film is about to have Sivakarthikeyan in the lead and Lyca Productions has announced about the project, a year ago. Vignesh directed actor Suriya in Thana Serntha Kootam, Vijay Sethupathi in Naanum Rowdy Thaan and Simbu in Podaa Podi.

What do you think on a director encouraging his fellow filmmaker to win Oscar ?? Comment your views below !!

Epic Reply Of Vijay Fans To The Fans Of Telugu Star Prabhas !!

Fans of Telugu actor Prabhas came up with a video saying that the likes received by "Master" teaser in youtube are paid ones. In...

“Yuvan Is Like A Father To Me” Simbu Gets Emotional & Sings A Vintage Song For Yuvan !!

On Sunday, The world's richest temple trust Tirumala Tirupati Devasthanams has said that it can't pay salaries and meet daily expenses due to the...