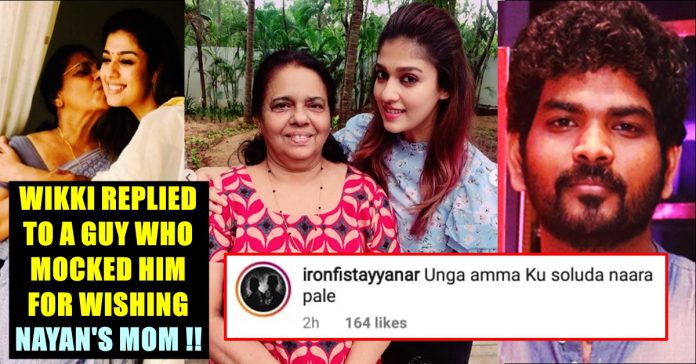 Director Vignesh Shivan celebrated the mother’s day on Sunday by uploading pictures of himself with his mother in his official Instagram account. “Happy Mother’s Day 😘😘😘 our access to God everyday … the most selfless characters in our lives ! May They always be blessed with the best of everything!! 😇😇😇🥳🥳🤩🤩 love you mommy & my sister 😇😇😇🥳🥳🤩🤩🤩 #happymothersday #godbless” he wrote as his caption to express his love towards his mother.

Happy Mother’s Day 😘😘😘 our access to God everyday … the most selfless characters in our lives ! May They always be blessed with the best of everything!! 😇😇😇🥳🥳🤩🤩 love you mommy & my sister 😇😇😇🥳🥳🤩🤩🤩 #happymothersday #godbless

To our surprise, the “Naanum Rowdy Thaan” filmmaker went on to upload the pictures of his live-in partner Nayanthara with her mother and wished her too. Posting a series of pictures of the actress from her childhood to now with her mother, Vignesh said “Happy Mother’s Day to you Mrs. Kurian… 🎉🥰 you’ve done a good job bringing up such a beautiful child 🤗🥳🥳🥳🥰🥰😌😌😌😌 We love you sooo much amma 😘😘🥰🥰😇😇🥳🥳 thank u ammuuuu” in his caption to wish his future mother-in-law.

As we all know, social media is not a place to expect 100% positivity. When it comes to one of the highest paid actress of India, the amount of hatred she receives would be on par with the love she gets from her fans. Now, one of such social media user, in an intention to spew hatred, tried to mock Vignesh Shivan for his post about Nayanthara ‘s mother.

The user who missed to see the previous post of the filmmaker, asked Vignesh to wish for his mother rather than wishing for his future mother-in-law. The choice of words Instagram user used and the number of likes he received made Vignesh to react to his comment. The user wrote “Unga Amma ku soluda naara pale” in his now-deleted tweet and it received more than 150 likes before getting deleted by him.

Vignesh who is pretty much active in Instagram, saw this comment and said “I wished bro 🙂 Happy Mother’s day to you too… She has given birth to such a nice, well mannered, kind hearted person like you ! God bless her :)” in a sarcastic way to troll the guy.

Here’s the screenshot of his reply which received more than 2000 likes in an hour.

However these kind of comments didn’t stop the filmmaker from posting about his love of life. In his next post, Vignesh Shivan officially confirmed that Nayanthara is going to be the mother of his future child through his caption.

Vignesh Shivan debuted to Tamil film industry through Simbu’s “Podaa Podee”.  The filmmaker developed a romantic relationship with Nayanthara during the making of his second film “Naanum Rowdy Dhaan”. After the success of Naanum Rowdy Dhaan, Vignesh Shivan directed actor Suriya in “Thaana Serntha Kootam”. He also started a production house with Nayanthara and named it as “Rowdy Pictures” with which he is producing “Nettri Kann” by having Nayanthara in the lead role. The filmmaker is also going to direct a movie named as “Kaathu Vaakula Rendu Kaadhal” by having Nayanthara, Vijay Sethupathi and Samantha on the lead roles.

Previous articleReshma Laughed On Seeing A Bad Comment About Losliya ?? Actress Replied
Next articleComplaint Registered Against Those Who Made Derogatory Comments On Vijay’s Family !!